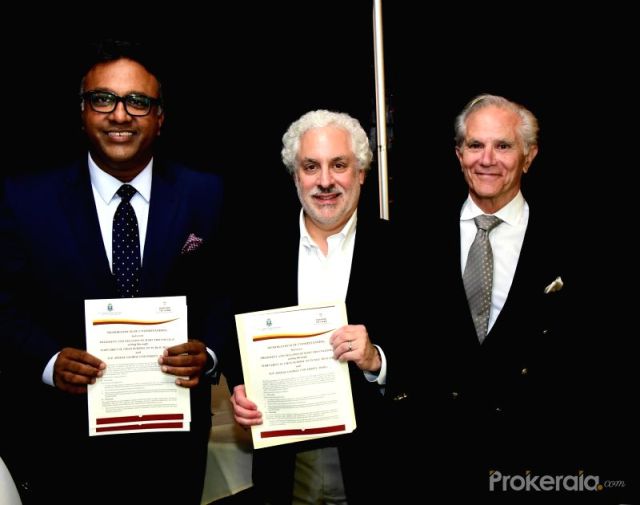 Boston : O.P. Jindal Global University (JGU) has signed a Memorandum of Understanding (MoU) with Harvard University to expand their collaborations in three areas, including in student engagement through an annual teaching session at Harvard for Jindal students.

The other two areas of collaborations that the MoU opened were organising joint conferences on themes of interest to both the institutions and engaging in other research and educational activities.

The MoU was signed by JGU and the Harvard T.H. Chan School of Public Health (HSPH) at Harvard University on Wednesday and institutionalised their ongoing collaboration on student engagements and paved way for other opportunities of institutional engagement between the two institutions, the Sonipat, Haryana-based JGU said in a statement.

In partnership with JGU, Harvard T.H. Chan School of Public Health has been organising for the past three years a study programme on the theme of “Human Rights and Development” at Harvard’s Weatherhead Center for International Affairs in Cambridge, Massachusetts.

The student engagement collaboration has taken the form of an annual study abroad programme conducted at Harvard University for nearly 30 students from JGU, the statement added.

At the successful completion of the programme, the Jindal students earn academic credits and the course will get reflected in the transcript, it added.

“The steady growth of JGU has been an extraordinary development in higher education in large part because of its constant focus on excellence and its commitment to global education, with over 200 collaborations in 50 countries,” said Harvard’s Stephen Marks, who leads the programme along with JGU Vice Chancellor C. Raj Kumar.

“This MoU will facilitate Harvard’s engagement with JGU in this commitment to excellence and global education,” Marks added.

Future conferences that are being considered under the MoU include issues that are at the intersection of human rights, development, law, public policy, public health and governance.

The Jindal Global Law School and the Jindal School of Government and Public Policy will be the principal partners to collaborate with the Harvard Chan School in these future conferences, JGU said.

The MoU also opens the way for joint research projects, joint training and capacity-building programmes and joint publications in the field of human rights, development and public health, JGU said.

“The collaboration with Harvard is an example as to what a young Indian university with a vision for promoting excellence can accomplish and indeed offer fantastic opportunities to its students and faculty,” JGU VC Raj Kumar said.

Naveen Jindal, founding Chancellor and JGU benefactor, said: “I am most delighted to learn about the collaboration that JGU has established with Harvard in relation to education and research. This achievement is a testament to the passion, commitment and dedication of our faculty and students.”

He added that the current year has been great for JGU as it had been given the “status of an autonomous institution by the Ministry of Human Resource Development” for having “broken into the QS BRICS Rankings 2018 and recognised as one of the top 250-300 universities among the 9,000 universities in the BRICS region”.