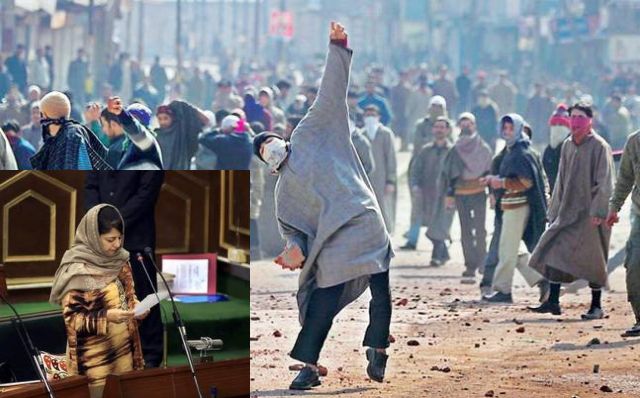 Jammu : The Jammu and Kashmir government has approved withdrawal of cases against 9,730 stone pelters, Chief Minister Mehbooba Mufti told the assembly on Saturday.

In a written reply in the assembly, she said that the government approved the withdrawal of cases registered between 2008 and 2017 against these people, including first-time offenders, though withdrawal of 1,745 cases is subject to certain conditions, based on recommendations of a committee set up to look into the matter.

Mehbooba Mufti also said that the government has also recommended amnesty for more than 4,000 people involved in minor incidents of stone pelting over the past two years.

Due to security reasons for them and their families, she did n t disclose the particulars of first-time offenders.

Seven cases were not admitted, 1,692 were chargesheeted and 1,841 were under investigation, the she added in her reply.

Intense clashes had rocked Kashmir Valley in 2016 following the killing of Hizbul Mujahideen commander, Burhan Wani on July 8 in a gunfight with the security forces in Anantnag district.

As many as 85 people were killed in clashes with security forces in 2016 Valley unrest.

She said 56 government employees and 16 Hurriyat Conference activists were among the 4,949 people found involved in stone pelting incidents while 4,074 were not affiliated with any separatist or militant group.