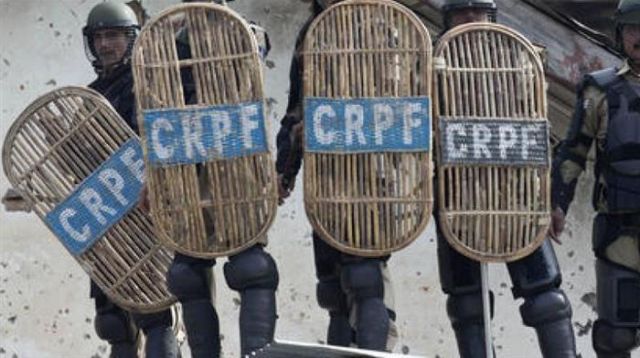 Srinagar : Hundreds of slogan-shouting residents on Saturday attended the funeral of a 21-year-old man who along with two others was injured on Friday when a paramilitary vehicle ran over protesters in an already volatile old Srinagar city.

The city remained on edge on Saturday as authorities imposed restriction and snapped mobile internet services amid Ramadan ceasefire in Jammu and Kashmir.

The incident and subsequent protests occurred days before Home Minister Rajnath Singh’s valley visit next week to review the situation after the Centre’s May 16 decision to call a ceasefire during the month of fasting.

Srinagar is already tense after Kaiser Ahmad succumbed to his critical internal injuries in a Srinagar hospital after the Central Reserve Police Force (CRPF) vehicle hit protests in old city neighbourhood of Nowhatta — a hot-bed of anti-government protests in the valley.

The death of the man triggered more angry protests. Hundreds of people on Saturday marched towards and gathered near a graveyard in Eidgah grounds here to offer a congregational funeral prayer.

Authorities placed chairman of his faction of Hurriyat Conference Mirwaiz Umar Farooq under house arrest at his Nigeen residence to prevent his participation in the funeral procession.

The speed of broadband Internet connections was also been reduced to prevent uploading of provocative posts and pictures.

The death of the Srinagar man triggered sharp criticism from former Chief Minister Omar Abdullah, tweeting if the government’s “ceasefire means no guns, so use jeeps”.

“Earlier they tied people to the fronts of jeeps and paraded them around villages to deter protesters. Now they just drive their jeeps right over protestors. Is this your new SOP,” Abdullah said and tagged Chief Minister Mehbooba Mufti.

“Security forces are soft targets for these politicians but they can’t speak against the militants as they can strike back,” the BJP MP from Udhampur said.

He said the criticism of security forces who risk their lives protecting the country was “unfortunate”.