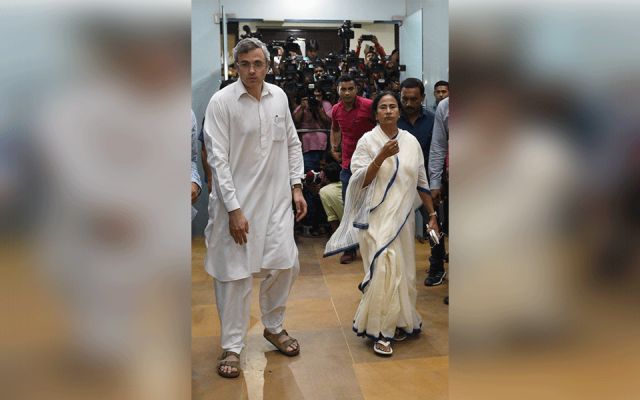 Kolkata : Former Jammu and Kashmir Chief Minister Omar Abdullah on Friday termed the ongoing unrest in Kashmir as one of the biggest failures of the BJP-led NDA government at the Centre, saying the situation in the Valley has worsened since 2014.

“One of the biggest failures of BJP has been Jammu and Kashmir. The security situation in the state has been deteriorating since 2014,” said Abdullah, who met Bengal Chief Minister Mamata Banerjee at the state secretariat.

“The reality is that the BJP government at the Centre was unable to conduct even a parliamentary by-election for a seat vacated by Mehbooba Mufti,” he said.

He said he welcomed the statement of Imran Khan, leader of the largest party PTI in Pakistan polls, that he will take two steps forward if India took one step to end the Kashmir “dispute”. But he said one must wait to see how the Pakistan leader acts after he is formally elected to head the civilian government.

“We have to wait for him to be sworn in. Whatever he said on Thursday about taking two steps forward for every one step that India takes, it sounds good but a lot will depend on the action he is willing to take,” he said.

Abdullah claimed that the incidents of tension and ceasefire violation along the India-Pakistan border have been continuing since the last couple of years.

“The situation in the border is also a continuing situation. It is not a recent development as result of yesterday’s election result in Pakistan. We have seen tension on the line of control for the last couple of years now,” he claimed.

Abdullah, who reached the city on Friday to attend a seminar on federalism, hailed Banerjee as a great supporter of Kashmir and said the two leaders talked at length regarding the economic activities and tourism in the valley.

“I felt it necessary to cal on Mamata di to discuss with her, the prevailing situation in my state because I know that she has a great concern for the situation in Jammu and Kashmir,” the Vice President of National Conference party said adding he would like to Banerjee to visit Kashmir in near future.

“We discussed about the economic activities and the need for Kashmir valley’s tourism to revive. West Bengal has been a very strong supporter of tourism in Jammu and Kashmir,” he added.