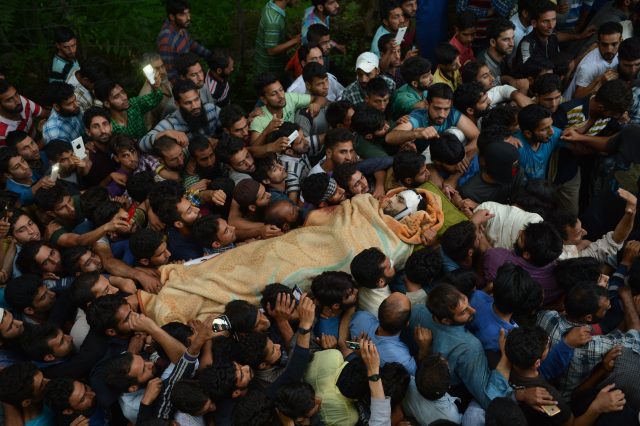 For the past few days, Kashmir has faced renewed turmoil, with ordinary people at the receiving end. And once again the elected representatives in the state have let their people down.

At a time when these MLAs, MLCs and even MPs should have been sharing the pain and agony of ordinary Kashmiris, they remain under official security. This has again cast huge doubts on the credibility of the institution of democracy, often extolled as the panacea for all ills in Jammu and Kashmir.

If an MLA or an MP can’t dare to step out in public in his or her constituency and reach out to a bruised people, isn’t it an indicator that something is terribly wrong with the system?

And by the way, could any of these legislators, or for that matter even ministers, claim to be in command of the situation? Even though there is a government in place, it seems lost in the chaotic situation.

Not a single day passes without confrontation between the government forces and an agitated people. Both sides lose something at the end of the day. People lose precious lives while the government loses credibility and touch with the masses.

It hurts to see government forces with drawn bayonets advancing on the Kashmiri populace, killing some, injuring others, thus adding to the already simmering anger and alienation in the Kashmir Valley. As for the people, one may question their ways of agitation but they have reached a point of disillusionment with the prevailing system.

An honest analysis of the developments the past few days will testify this. Pushed to the wall by constant provocation in the form of killings of their peers in police action, young Kashmiris feel defeated and lost that they are willing to stake even their lives.

Having faced massive agitations in 2008, 2009 and 2010, by now the government and its police should have fixed the wrongs in its mob-control mechanism and tactics. But unfortunately it has not happened.

The response of the men in uniform continues to be as provocative and as damaging as it has always been. And the government too appears as helpless as ever. Had it set a correct precedent by fixing the responsibility on the people within its security establishment — police and paramilitary — for using disproportionate force, the situation would not have come this far.

But nothing of the sort has been done. Instead, the unjustifiable is always justified through false and frivolous reasons, adding to the anger in Kashmir.

In fact the present is only yet another re-run of the events that have repeated more than once in the past many years. On every single occasion, the police and paramilitary forces have failed the governments by killing people when such killings can and should be avoided.

For the sake of argument, let’s buy the official assertion that “certain forces” want to get people killed to keep the pot boiling. If so, the challenge to the government forces is not to give response that would give the adversary what it desires – martyrs.

But this is not happening. The government forces are not showing the restraint they are supposed to exhibit. Each time they face public protests, they resort to indiscriminate use of excessive force. Thus, the government forces seem to play into the hands of the adversary.

The government must confess its failure — of failing to protect the very people it is under oath to shield and serve.—-IANS

Govt bans PFI and its associates, affiliates for five years...