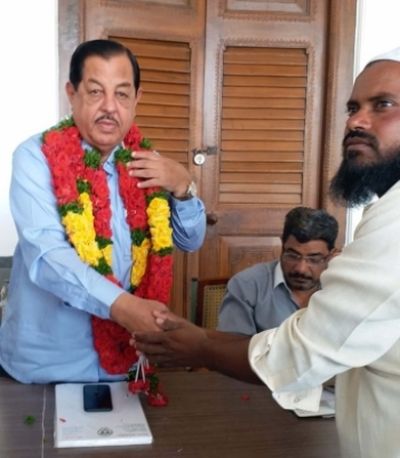 Hyderabad : With the lone BJP MLA in Telangana Assembly triggering a row by refusing to take oath under AIMIM member Mumtaz Ahmed Khan as Pro-tem Speaker, the TRS government on Monday defended Khan saying his appointment is in tune with the state’s ‘Ganga Jamuni tehzeeb’.

T. Raja Singh of Bharatiya Janata Party (BJP) on Sunday announced that he will not take oath as a member of Assembly with All India Majlis-e-Ittehadul Muslimeen (AIMIM) MLA Khan as the Pro-tem Speaker.

Raja Singh, who represents Goshamahal constituency in Hyderabad, said he would not step into Assembly or take oath before the MLA of a party which speaks of eliminating Hindus and does not say ‘Vande Mataram’ or ‘Bharat Mata Ki Jai’.

Khan, who was elected from Charminar constituency in last month’s elections, will preside over the first day of the newly-elected Assembly on January 17. The same day members will take oath.

“The Telangana government with reference to the matters concerned the Legislative Assembly is taking decisions continuing the Ganga-Jamuni tehzeeb,” said a statement released from the Chief Minister’s Office on Monday after the first cabinet meeting.

Mumtaz Ahmed Khan of Muslim community is nominated as Pro-tem speaker, it said.

The AIMIM, which has seven members in the 119-member Assembly, is a friendly party of TRS, which retained power with a landslide victory.

Exactly a month after TRS’ win, the cabinet had its first meeting, presided over by Chief Minister K. Chandrashekhar Rao and attended by Home Minister Mohammad Mehmood Ali and top officials.

KCR, as TRS chief is popularly known, is likely to expand his cabinet later this month.

The cabinet has placed on record its deep appreciation to the Election Commission in general and Chief Electoral Officer Rajat Kumar for the successful and peaceful conduct of Assembly elections.

The government decided to provide copies of the Constitution of India, Assembly procedures, booklets and other information connected to the Legislature procedure in Telugu, English and Urdu languages to all the MLAs.