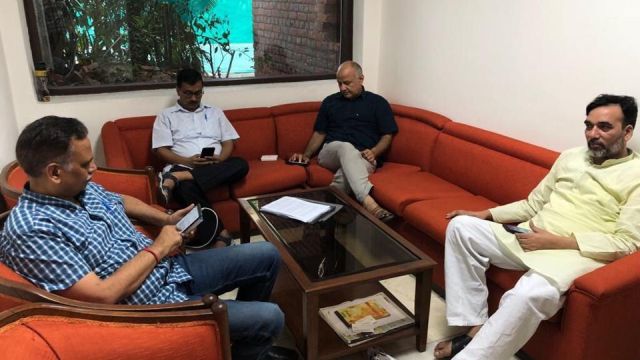 Kejriwal, a diabetic, Deputy Chief Minister Manish Sisodia and cabinet ministers Jain and Gopal Rai were supplied food from outside after they spent the night at Raj Niwas. This was before Jain decided to go on hunger strike.

The four went to the LG’s office on Monday at 5.30 p.m. to press their three demands, including a direction to IAS officers to end their “strike” and to take action against officers who have struck work for “four months”.

The Chief Minister also demanded approval to his government’s proposal to deliver ration to the poor at their houses.

They decided to stay in Baijal’s office until their demands were accepted. The Raj Niwas called it a “protest without reason”.

The Chief Minister on Tuesday morning tweeted that his “struggle” was on. “My dear Delhites, Good Morning. The struggle is on.”

In another tweet, he accused the Lt Governor of defending the “IAS strike” by saying that the officers were working and were not on strike.

Kejriwal released a video in which he is heard telling the people in Delhi that the protest was “for you all, for the people of Delhi so that you can get roads, schools, hospitals, Mohalla Clinics, water and electricity”.

In the video, he said IAS officers were “only working on important files” and were “not responding to minister’s calls and messages, not attending our meetings.

“People of Delhi are suffering, the work planned for Delhi by the government is suffering.”

In the video, Kejriwal also said Baijal had refused to approve the doorstep delivery of rations for Delhi residents.

“He asked us to seek permission from the Centre. We all know what does it mean. The file will go and will remain there for five years,” Kejriwal said.

Jain in another video said even after 18 hours of their sit-in, “the LG is not ready to accept any of our demands.

“I am very sad with this attitude of the LG and so I am starting a hunger strike,” he said in the video released from the LG office.

On Monday, Raj Niwas in a statement said Kejriwal was informed that the file on doorstep delivery of ration was lying with the Minister for Civil Supplies for nearly three months.

“Hence, it will only be appropriate to expedite the matter of taking up the proposal with the government of India at the earliest as pointed out by the Law Department… Such a scheme requires prior approval of the Central government under the National Food Security Act, 2013,” the statement said.

Kejriwal and the ministers have threatened to stay put at Raj Niwas till their demands were met. They were constantly updating details through tweets. They spent the Monday night on the sofas in Baijal’s waiting room.

A number of party leaders squatted on the road outside the Lt Governor’s office to show their support to Kejriwal.

Security outside Baijal’s office was beefed up on Monday evening. The CRPF and policemen and women were deployed in a 2-kilometre radius of the LG’s Office.