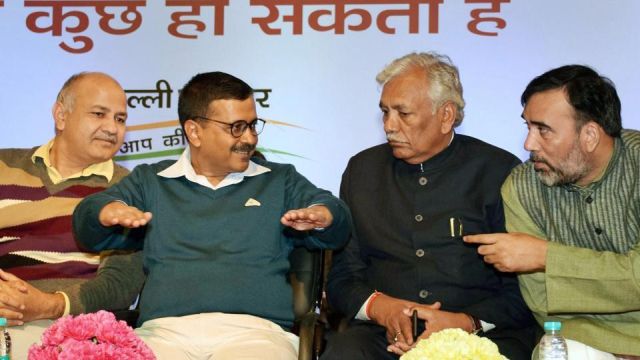 New Delhi : The row over who controls Delhi’s bureaucracy escalated on Wednesday as Chief Minister Arvind Kejriwal and Deputy Chief Minister Manish Sisodia launched a full attack against the Centre for not letting the city government implement some major schemes by pressurising the officers.

“Delhi government’s scheme of doorstep ration delivery and CCTV installation have been left in a limbo,” Sisodia said, adding, “even though we have decision-making powers, the officers who implement these projects are under the Central government, which is deliberately causing obstruction in our work”.

“In a way, BJP (central government) is saying that you have been given the powers to take decisions, keep taking those decisions, but we won’t implement it,” he said.

On July 6, the Delhi government approved doorstep ration delivery scheme but Sisodia said that the officer rejected it by saying that he will ask the Law Department first. “They are just rotating the files to cause hindrance in the elected government’s work.”

“The big question that arises is if the Delhi government is taking a step in stopping black marketing in ration delivery, then why is the Central government, through their officers, trying to stop it,” he asked.

He also mentioned the proposal where people working on a contractual basis would be given 20 per cent bonus and how the officers, despite ministers’ approval of the project, rejected the decision.

He also said that the government’s CCTV installation project has again hit a snag due to recommendations made by Lt Governor’s committee which mandates permission from police before installation.

“According to the recommendations by the LG’s committee, anyone who wants to install CCTV cameras would have to get police permission. This is a huge setback for women safety,” he said.

Kejriwal also said that the licensing process will only increase corruption.

“What will police see before giving CCTV license? On what basis will police give license? It will only increase bribery. It’s a huge blow to women safety because all existing cameras in Delhi will have to be removed till they obtain a license and all new CCTVs will have to wait for a license,” he tweeted.

Kejriwal, on Wednesday, also approached Union Home Minister Rajnath Singh and told him how the Lt Governor and Centre are “twisting the orders of Supreme Court.”

“He said that he will discuss the matter with his officers and meet me again on July 16,” Kejriwal said after the meeting.

Last week, the Supreme Court held that the executive power of the Centre is limited to only land, public order, and police, while the elected government of Delhi enjoys powers on all other subjects, including “services”.

Lt. Governor Anil Baijal has, however, maintained that the Union Home Ministry has advised him to keep exercising powers over “services” because the 2015 MHA notification remains valid until the regular bench of the apex court decides on it.

Manish Sisodia claims of getting ‘message’ from BJP