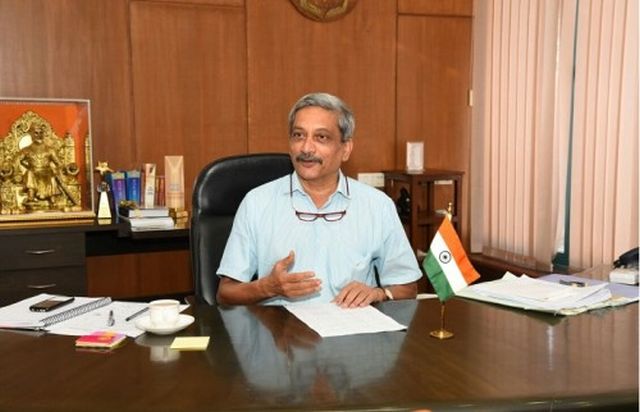 Panaji : There was a rare moment of levity on Monday amid tense ongoing negotiations for a leadership alternative to ailing Chief Minister Manohar Parrikar, when a BJP leader, after meeting party’s General Secretary (organisation) Ram Lal, said: “If choosing an alternative CM is so difficult, we should just appoint his Principal Secretary P. Krishnamurthy to the post. After all, he’s virtually calling the shots in administration without uttering a word for months now.”

Krishnamurthy is a 1997-batch Indian Administrative Service officer, has been Parrikar’s favourite mandarin for nearly two decades now and has been the IITian’s omnipresent shadow, irrespective of Parrikar’s stints at the state Secretariat or Defence Ministry in the South Block in Delhi.

According to Ministers in the BJP-led Coalition government, Krishnamurthy is known to wield more authority and say in matters of administration than most Ministers as well as the Chief Secretary himself.

As Ram Lal and his team may have unearthed during their two-day meetings with party officials, MLAs and alliance partners, the most difficult part to deal with as far as finding a replacement for Parrikar is negotiating the cult and coterie of which Parrikar built around himself in his three-decade stint as the state BJP’s top boss, without formal appointment.

BJP sources say that in Parrikar’s absence, the coterie is perhaps one of Parrikar’s most uncomfortable legacies, which the party High Command may have to work their way around with, for choosing a replacement or successor for the Goa BJP’s tallest leader ever.

This is especially so, because unlike other states, where a robust organisational set- up serves as a strong framework for BJP’s growth, there is no potent organisational hierarchy in place in the upper echelons of the Goa BJP’s decision-making elders, who have played a poor second fiddle to Parrikar for far too long.

In case of Goa, both in administration as well as in the ruling party, the cult and coterie have overshadowed formal administrative processes and the “party organisation”, as BJP leaders prefer to call it.

“There is no doubt that Parrikar was always our best bet for Chief Minister and our greatest (state) leader. But one also cannot ignore the fact that the state needs to be governed efficiently and that the party organisation needs strengthening. This cannot happen when he is fighting a severe ailment. While we have the CM in our prayers, but for the betterment of the party, government and state, we have to look beyond any individual,” a former BJP MLA, who met Ram Lal and other central observers, told IANS.

Over the last two days, nearly all sitting MLAs as well as party state President Vinay Tendulkar, a favourite of Parrikar, have been lobbying with Ram Lal for the Chief Minister to continue.

“Within the BJP, they should find somebody and Parrikar should remain the Chief Minister till he is alive,” Cabral said.

Both alliance leaders had called on Parrikar on Friday at a private hospital, more than a week after the Chief Minister’s return to Goa from the US, during which the former Defence Minister had cut off all communications from Ministers and party workers, including Tendulkar and core committee members.

Ram Lal was briefed about the lengths at which the state BJP leaders had to go through to convince Sardesai that the Deputy Chief Ministership offer made by Parrikar to the Goa Forwar leader’s rival was not vetted at all by the BJP state core committee.

Sadguru Patil, a keen political reporter and columnist of a Marathi daily, in a column has put the spotlight on the growing mistrust between Parrikar and the BJP’s top brass in the state.

A new CM will inevitably be appointed by the BJP High Command, which is looking to stabilise the power apparatus in Goa, in Parrikar’s absence. Whether the new appointee will be able to break through the shackles of the Parrikar cult and the grip of the latter’s coterie is anybody’s guess.