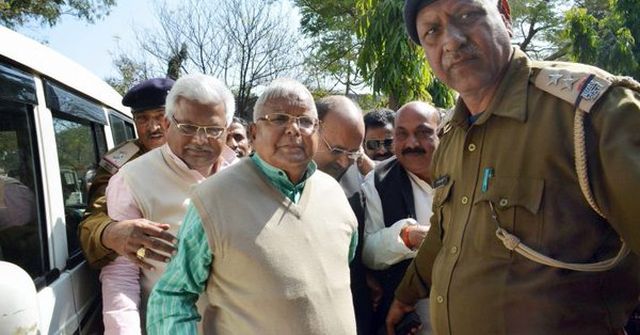 Ranchi : Former Bihar Chief Minister Lalu Prasad will be jailed for 14 years in the fourth fodder scam case he has been convicted in, with a special CBI court here on Saturday sentencing him to seven years each in two cases under it, and ordering the sentences run consecutively.

Pronouncing the sentence, CBI judge Shivpal Singh sentenced the Rashtriya Janatya Dal (RJD) supremo to seven years rigorous imprisonment on the various sections of the Indian Penal Code he has been charged under and levied a fine of Rs 30 lakh, which if unpaid, would entail a further year’s simple imprisonment.

Lalu Prasad was sentenced to a similar sentence and fine on the charges under the Prevention of Corruption Act.

“The sentences run in the consecutive way, not concurrently,” says the judgment of the special court.

Both Lalu Prasad and Mishra are facing five cases each in the fodder scam in Ranchi.

There were 31 accused in this case, of which 19 were convicted and 12 acquitted.

Lalu Prasad was convicted in the first fodder scam case in 2013 and awarded five years in jail.

He was convicted by a special CBI court in the second case on December 23, 2017, and awarded three and half years’ imprisonment on January 6.

He was convicted in the third case on January 24, related to fraudulent withdrawals from the Chaibasa treasury, and got a five-year jail term.

The multi-million-rupee fodder scam surfaced in the 1990s when Lalu Prasad was Chief Minister of undivided Bihar. The probe was handed over to the Central Bureau of Investigation on the Patna High Court’s order.

The bulk of the cases were transferred to Ranchi after Jharkhand was carved out of Bihar in 2000.