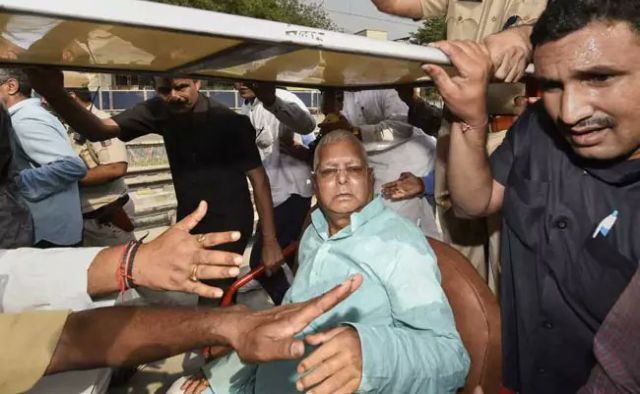 New Delhi : Convicted RJD chief Lalu Prasad on Monday blamed Prime Minister Narendra Modi after he was told to leave AIIMS where he was being treated to return to Ranchi, shortly after Congress President Rahul Gandhi called on the former Bihar Chief Minister.

“It (shifting from AIIMS to Ranchi hospital) is under the pressure from the Centre, from Narendra Modi that I am being sent back there. It is entirely due to political rivalry,” Lalu Prasad told reporters as he came out of AIIMS on a wheelchair after being discharged.

The RJD leader said shifting him back to the Rajendra Institute of Medical Science (RIMS) in Ranchi was a conspiracy so that his health would deteriorate further. “I am being shifted to a place where there are no facilities. It is a tough time, but I will face it.”

But AIIMS spokesperson B.N. Acharya said the decision followed the recommendation of a medical board set up for his treatment which found significant improvement in his health and that “he was discharged on Saturday” itself.

Saying Lalu Prasad was currently stable and fit to travel, Acharya said in a statement: “The medical board met on April 28, reviewed his progress and decided that he was fit to be discharged. However, due to his chronic problem of hypertension, diabetes and backache he was advised to be on regular follow up and management at RIMS Ranchi. He was therefore discharged on Saturday. However he requested to be kept in hospital as he wanted to travel on Monday.”

Some supporters of the RJD leader, annoyed over his “sudden discharge”, allegedly misbehaved with the hospital staff and even damaged the glass door of Cath Lab, resulting in injury to a security guard. AIIMS asked police to lodge an FIR.

Earlier, Rahul Gandhi called on Lalu Prasad at AIIMS and had a half hour meeting with him.

Lalu Prasad, who was admitted to AIIMS on March 29 for treatment of heart and kidney related ailments, wrote in a letter to AIIMS Director Randeep Guleria: “If I am sent from AIIMS to Ranchi medical college, in case of any danger to my life, sole responsibility will be on you all.

“Doctors are a reflection of god. They should not take any decision under pressure from any individual or political party. Their first duty is towards complete recovery of the patient’s health. Till the time I am fully healthy, I should be kept here for treatment,” he added.

The RJD leader said he had backache, frequent dizziness and had fallen in the bathroom several times.

“He was put on injectable antibiotics and then on oral antibiotics. His blood sugar was controlled and evaluation for cardiac and renal status was also done. He showed significant improvement. He had no fever and his antibiotics were stopped.”

Lalu Prasad was admitted to RIMS in Ranchi on March 17 following complaints of uneasiness when he was lodged at the Birsa Munda Jail where he is serving a jail term since December 23, 2017 in connection with the fodder scam.

He has been convicted in four fodder scam cases since 2013 — the latest being the Dumka treasury case in which a special CBI court sentenced him to 14 years in jail.