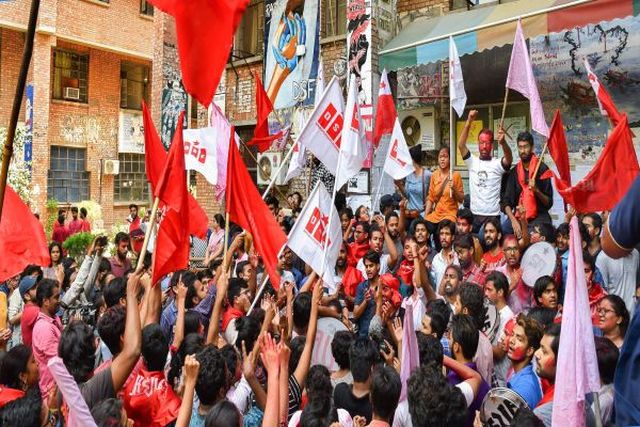 New Delhi : The United Left alliance of four student groups on Sunday won all four top posts in the Jawaharlal Nehru University Students Union (JNUSU) and declared that it was a victory for those who don’t want ‘Hindustan’ to become a ‘lynchistaan’.

After violence-marred counting process, the Left easily overcame the challenge of the RSS-backed Akhil Bharatiya Vidyarthi Parishad (ABVP), leaving it way behind and triggering noisy celebrations in the sprawling campus.

As the results became known, Left supporters in the traditional Left bastion celebrated with slogans of “Lal Salam” and “Inquilab Zindabad”. A victory march was taken out from Sabarmati Hostel.

Balaji called it a “victory for the students and the people of the country who are unitedly fighting this fascist government which is imposing anti-student and anti-people policies… It is a victory for those who don’t want ‘Hindustan’ to become ‘lynchistaan’.”

Balaji blamed the ABVP for hooliganism in both Delhi University and JNU.

“In DUSU election we saw how the ABVP Vice Presidential candidate was involved in a massive fight in Zakir Husain College. And yesterday, we saw how the common students were attacked by the ABVP in JNU.

“They are trying to run away from issues like fee hike, fund cut…”