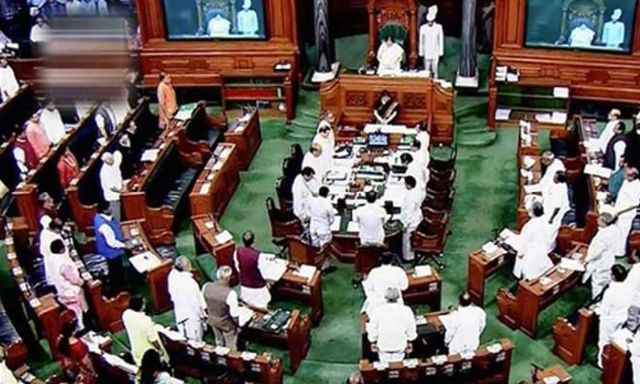 New Delhi : The Lok Sabha was adjourned for the day on Thursday after two brief adjournments during Question Hour amid unrelenting protests by the opposition, which raised the Rafale deal among other issues, while NDA ally Shiv Sena demanded an ordinance to pave the way for the construction of a grand Ram temple in Ayodhya at the earliest.

Soon after the House resumed its proceedings at noon following two adjournments, Congress, Telugu Desam Party (TDP) and Shiv Sena members raised slogans in support of their demands and came near the Speaker’s podium.

The Congress members were keen on a discussion on the Rafale fighter jet deal under rules that entail voting; DMK raised the Cauvery water distribution issue between Tamil Nadu and Karnataka and TDP members sought special category status for Andhra Pradesh.

Shiv Sena’s Anand Rao Adsul demanded that the government bring an ordinance before the next general elections for the construction of a grand Ram temple in Ayodhya.

Adsul also reminded the Bharatiya Janata Party (BJP) of its promise on the construction of the Ram temple made in its 2014 election manifesto.

“The government should take initiative to bring an ordinance and pave the way for construction of Ram temple in Ayodhya before the next general elections,” Adsul said.

He said former Prime Minister Atal Bihari Vajpayee could not take the initiative for the construction of the temple as he was running a coalition government of 25 political parties.

“But here is a government which has absolute majority. They had mentioned it in their manifesto, too.

“Four-and-a-half years of this government has already passed but nothing has happened. Our alliance with the BJP is based on Hindutva but it seems the BJP has forgotten it,” he said.

Adsul also said the results of the five state assembly elections were an indication and the government should get the message.

TDP member Venkateshwara Rao sought to put a poster over the mike installed near the Speaker’s podium but was reprimanded by the Speaker who said she will be forced to name him. Once a member is named, he or she has to leave the House.

As soon as Adsul concluded his speech, Mahajan adjourned the House for the day as sloganeering continued.

Shiv Sena members had also protested in the Parliament complex in support of their demand.

BJP MP B.Y. Raghavendra, who won the by-poll from Shimoga, earlier took oath as a new member of the House.