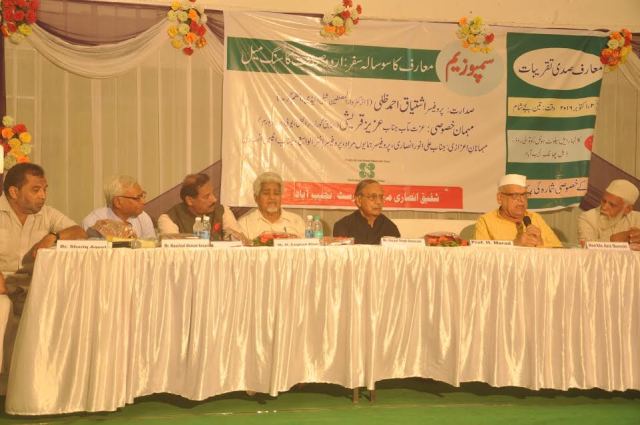 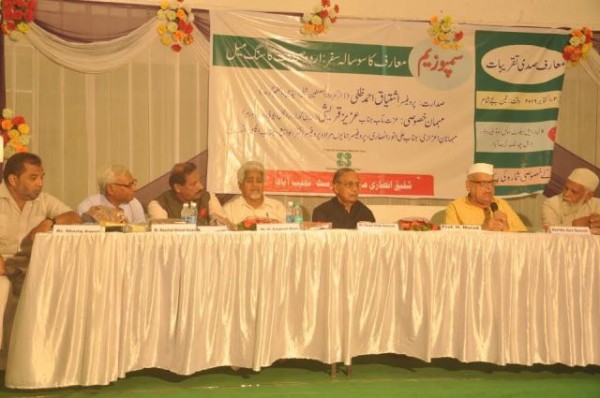 Najibabad:  “Ma’arif is not only a biography of Indian Muslims but it is their entire encyclopedia. It is the treasure of knowledge. One can have a fair idea about the problems of muslims, about the start of their journey and the place where they stand today by going through the pages of Ma’arif.” These thoughts were expressed by Professor Ishtiyaq Ahmad Zilli in his presidential address in a symposium entitled, “hundred years of Ma’arif: a milestone in urdu journalism” organized by Shafiq Ahmad Ansari Memorial Trust, Najibabad.

Hon’ble Aziz Qureshi, a formal Governor of Uttarakhand, U.P. and Mizoram participated in the Symposium as a Chief Guest. Two special numbers of Ma’arif based on its editorials were released on this occasion. Mr. Naushad Ahmad Ansari, the moving spirit behind organizing this Symposium was presented by the Shibli Academy, Azamgarh a deluxe edition of Siratunnabi. Professor Zilli further said during his presidential address, “Ma’arif continued to remain in publication even during difficult and tough times. The heartfelt pains and the deep concern for the community was the fundamental characteristic of Allama Shibli’s personality, drawing from which he worked tirelessly to pull the community out of a defeatist mindset and inferiority complex, and generated a sense of pride in them. Shibli symbolized the movement itself. The publication of the monthly Ma’arif magazine embodied the vision and anxieties of the Maulana Shibli.” Hon’ble Aziz Qureshi, the Chief Guest of the function congratulated the organizers of the Symposium and said, “monthly Ma’arif is the great asset of the community. He stressed the audience to work for the issues related to the community.”

Mr. Akhtarul Wasey, the Guest of the Honor, an expert in Islamic Studies and the Vice Chancellor, Maulana Azad University, Jodhpur said, “Shafiq Ahmad Ansari Memorial Trust, Najibabad has discharged a collective debt of scholarship and education which was due on the entire educational and literary world.” He further said, “Ma’arif is the collection of our educational, literary and philosophical history encompassing a hundred years.” Professor Humayun Murad, the Guest of the Honor and a former President, Staff club, AMU, Aligarh said, “Shibli Academy and Ma’arif both have raised our head high in the field of education and scholarship.”

Prof. Khalid Mahmood, former Head, Department of Urdu, Jamia Millia Islamia, New Delhi said, “the people of Najibabad have proved that they truly understand and recognize the significance of Ma’arif.” He further said, “any history of the interpretation of Ghalib and Iqbal can’t be complete without Ma’arif.” In the beginning of the function, Mr. Naushad Ansari welcomed the guests and the audience and said, “Taking into account the educational and literary services of Ma’arif spanning a century, it was necessary to organize the centenary celebrations of Ma’arif befitting its status and prestige, that was why we selected Najibabad and invited most eminent scholars and literary persons for these celebrations.”