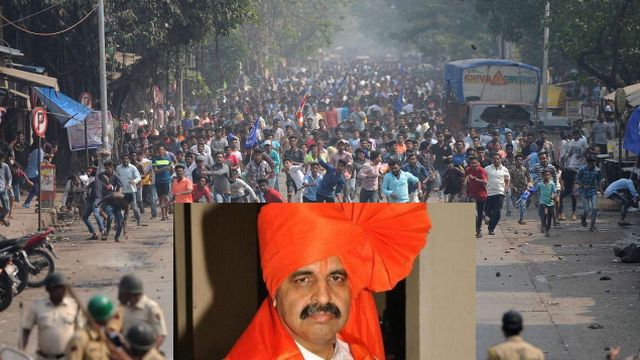 He was to be presented in a local court later on Wednesday afternoon for remand, they added.

Significantly, the development came a day after Maharashtra Chief Minister Devendra Fadnavis announced that all police cases pertaining to the caste riots (of January 1 and later) — barring serious offences — would be withdrawn.

A team of Pune Rural police picked up Ekbote, 60, from his home in Shivajinagar amidst tight security around noon.

The arrest came in the wake of two FIRs lodged by Dalit activists Sushma Andhare and Anita Salve against Ekbote and another rightist leader from Sangli, Sambhaji Bhide alias Guruji.

The FIRs, lodged with the Pune city police in early January, were later transferred to the Pune Rural police for investigation and further action.

The complainants had accused them of instigating, planning and orchestrating the violence during the 200th anniversary celebrations of the Anglo-Maratha War between the army of Peshwa Bajirao II, which was conquered by a small force of the East India Company that comprised a large number of Dalits.

Earlier, the Pune Rural police had summoned Ekbote on at least five occasions, but he appeared only once and then allegedly did not cooperate in the probe.

He had applied for anticipatory bail in the Pune Sessions Court, which was rejected on January 22 and again dismissed by Bombay High Court on February 2.

Thereafter, the Pune court issued an arrest warrant against Ekbote who moved the Supreme Court for interim bail which was granted, but only after the apex court rapped the state government for tardy progress in the investigations.