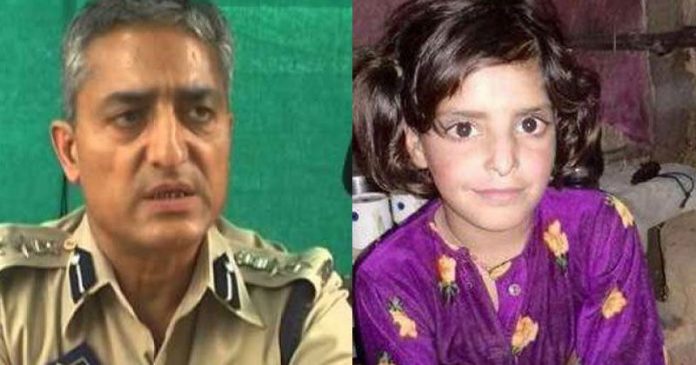 Srinagar : The rape and murder of a minor girl Asifa in Kathua may have polarized the air  in the already conflict ridden  state of Jammu and Kashmir , but even in these times of gehenna, a glimmer of hope dwells.  Ramesh Kumar Jalla, a Kashmiri Pandit police officer, braving threats and boycott from Hindu right wing organisations is spearheading the investigations and was responsible for uncovering the details of the horrific crime.

Even though the prominent faces of Pandit community like Sushil Pandit brewed conspiracy theories and saw loopholes in police charge- sheet, the 59-year-old Jalla, senior superintendent of police (Crime Branch) Jammu,  supervised the  investigation after it was entrusted to the Crime Branch following protests in the Assembly over Asifa’s murder.

Jalla orginally a resident of old town Srinagar in Kashmir is the son of Late DN Jalla who also served in JK Police.

Jalla has earlier served in different capacities in the Kashmir valley for nearly thirty years. In an interview to a local newspaper Jalla said “I have never been treated as a Kashmir Pandit in Kashmir or Jammu. I have always been treated as policeman.”

Jalla’s honesty and sincerity in dealing with the case has made him a hero on social media. One user wrote on social networking site Facebook ‘ In these times of despair when even rape of a minor girl is made a Hindu- Muslim issue, Jalla’s impartiality and sincerity sets out an example.”

Jalla says he had to work hard with Special Investigation Team (SIT) in a bid to crack the case. “It took some time to join the missing links but ultimately we succeeded. A lot of evidence had been destroyed too” he adds.

Jalla submitted the report even before the deadline.