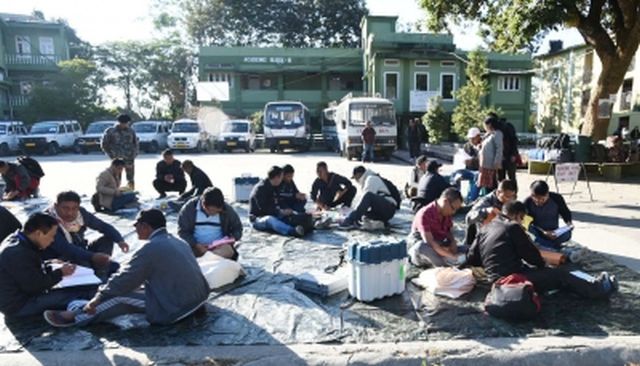 By Devyani Chhetri and Sejal Singh,

Mumbai : On November 28, Mizoram — the last northeast bastion of the Congress — will vote to elect a new government that will oversee what is planned as Indias gateway to Southeast Asia.

With about half as many voters as south Mumbai, Mizoram is one of India’s fastest-growing, healthiest (second) and most-literate (third) states.

However, there are issues that threaten to slow the growth of a state that has been administered by either the Congress or the Mizo National Front (MNF), ever since the peace accord of 1986. That agreement ended the long-running Mizo uprising, marked by air raids on capital Aizawl in March 1966, the only time the Indian Air Force bombed its own people.

Mizoram’s 768,000 voters will vote in 40 constituencies to determine if the Bharatiya Janata Party (BJP) will make its first inroads and complete the party’s surge into the northeast. After the victory of the BJP-led Northeast Democratic Alliance (NEDA) in Meghalaya, Nagaland and Tripura earlier in 2018, seven of eight states in the region —Sikkim, Assam, Meghalaya, Nagaland, Tripura, Arunachal Pradesh and Manipur — are governed by the alliance.

Led by Lal Thanhawla, former insurgent-turned-mainstream politician, the Congress has administered Mizoram for the last 10 years. Previously, in the 2013 elections in Mizoram, the party won 34 of 40 seats. But since 2014, the Congress’ vote share declined 13.4 percentage points across the northeast.

Mizoram has been positioned as the epicentre of the Centre’s Act East Policy, which aims to harness shared cultural and border ties between India’s northeast and south-east Asian countries such as Cambodia, Myanmar, Vietnam, Thailand and other ASEAN nations.

Filtered through various indicators, Mizoram boasts a raft of high-performing statistics. The state is one of the fastest-growing in the country, with its economy growing by 12 per cent between 2013 and 2016. It has India’s second-best health indicators and third-best literacy.

It also grapples with illegal migrants, inter-tribal differences, an inability to create jobs for its educated youth and tensions sparked by allegations of corruption against the current government. These tensions have led to the rise of sub-regional alliances, such as the Zoram People’s Movement (ZPM) — comprising of regional parties such as Zoram Nationalist Party, Mizoram People’s Conference and Zoram Exodus Movement — and this may disrupt the traditional exchange of governments between the Congress and MNF.

More than 94 per cent of Mizoram is tribal, 80 per cent is Christian, and minorities — the Chakmas and Brus — claim racial discrimination at the hands of majority communities, such as the Lusei, Ralte, Hmar, Khiangte and Lai.

Mizoram has one of the lowest rates of anaemia among women in the northeastern (24.8 per cent), child wasting (8.4 per cent), stunting (28.1 per cent) and underweight children (12 per cent), according to data from the National Family Health Survey-4 (NFHS-4).

It ranked first among smaller states and second nationally in NITI Aayog’s overall 2018 Health Performance Index. The state’s health-related successes can be attributed to its per capita expenditure on health, which was five times the national average: 4.5 per cent of GDP in 2015, compared to India’s 1.02 per cent.

However, Mizoram’s progress has lagged other states. Manipur, which ranked second among smaller states in NITI Aayog’s Health index, improved by 7.18 per cent compared to Mizoram’s 2.43 per cent.

The proportion of Mizoram’s people living below the poverty line rose from 15.4 to 20.4 per cent over seven years to 2011. Mizoram’s high literacy rates are marred by high school-dropout rates and inter-district disparities. The dropout rates in primary and secondary schools are 15.36 and 30.67 per cent, respectively, more than the comparable national averages of 6.35 and 19.89 per cent; Mizoram’s dropout rates are also the northeast’s highest.

There is a 38.76 percentage point gap in literacy between the most literate district (Serchhip, 98.76 per cent) and the least literate (Mamit, 60). The districts of Lawngtlai (66 per cent) and Mamit suffer literacy rates lower than not just the state average but the national average of 70.04 per cent.

Hills cover over 80 per cent of Mizoram, and with 60 per cent of the population dependent of agriculture, the state is challenged by difficult-to-farm areas and declining soil quality, affected by the tradition of jhum — or slash and burn — cultivation.

A National Land Use Policy, 2009 (NLUP), which aims to revitalise the primary sector by introducing alternatives to jhum cultivation, such as reforestation and market infrastructure, has been a prominent promised intervention by the state government and the Congress’ previous election campaigns.

But NLUP funding has been roiled by allegations of corruption. In 2015, a government audit found funds for bamboo plantations filched. Farmers took to the streets of Aizawl to protest the NLUP’s failure in providing a market to farmers, who were made to choose broom grass and ginger cultivation.

Yet, as the state goes to vote, another contradiction emerges: Mizoram had 2.62 per cent more women voters than men in 2013. But all 40 legislators are men. Of the six women who contested the 2013 elections, only one was from the Congress. In 2018, 4.8 per cent more women electors are set to vote. Whether any of the men will be displaced will be clear on December 11, when results are announced.

(In arrangement with IndiaSpend.org, a data-driven, non-profit, public interest journalism platform, with whom Sejal Singh is an intern. Devyani Chhetri is a graduate of LSR College. Views expressed are those of IndiaSpend. Feedback at respond@indiaspend.org)