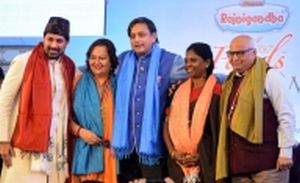 Jaipur, Jan 23 : The silence of Prime Minister Narendra Modi on key issues of communal tension and violence is baffling for a leader who is hailed as a great communicator, Congress leader Shashi Tharoor said on Saturday.

“The prime minister’s silence is baffling for one termed a great communicator. He takes frequently to the microphone, TV and Twitter on various matters. Even before (BJP leader) Navjot Singh Sidhu’s operation, he is wishing him well, but on key issues there is no communication,” he said at a press conference at the Jaipur Literature Festival.

“Soon after he became prime minister, a Muslim techie was lynched in Pune, there have been several other incidents but Modi was silent. Even in this incident (suspended Dalit research scholar’s suicide in Hyderabad), it took him a week to respond. I believe his grief was genuine but it was delayed,” he said.

On the suicide of Rohith Vemula, Tharoor said that in an ideal world, there will be no caste, but it cannot be denied that there is caste consciousness in India, and education is not exempt.

He said he has, in the recent past, received several messages from Dalit students and teachers about the discrimination they face, and even if they all may not be true, it is clear there is a perception of discrimination.

He refused to answer a query about the investigations into the death of his wife Sunanda Pushkar.

“I’m not commenting on the matter by principle and policy till police complete investigations and the case goes before a court,” he said.

About his presence at the JLF where he was involved in several sessions already during its first three days, he said he was only a recent politician, and had a longer stint as a writer.

“I had a longer and significant career as a writer, and came into politics only to do something which was earlier manifested in my writings. Whereas I had undertaken studies of India’s course, I now got the opportunity to influence it.”

Tharoor confessed the transition had not been “easy” but signalled that he was not going to quit.

“The challenges I faced would have been easier had I not been in politics. There is a saying ‘If you can’t stand the heat, get out of the kitchen. I’m not going to leave the kitchen,” he said.

About the recently-revealed letter, purportedly written by Jawaharlal Nehru in 1945, claiming Netaji Subhas Chandra Bose was on Russian soil, Tharoor dismissed it as a “complete fake”.

“It is a complete fake, circulated by RSS types. One it is unsigned, and then it is in atrocious English which Panditji could have never written,” he said.—IANS