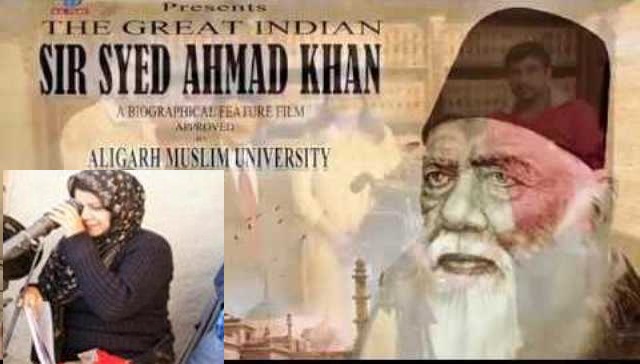 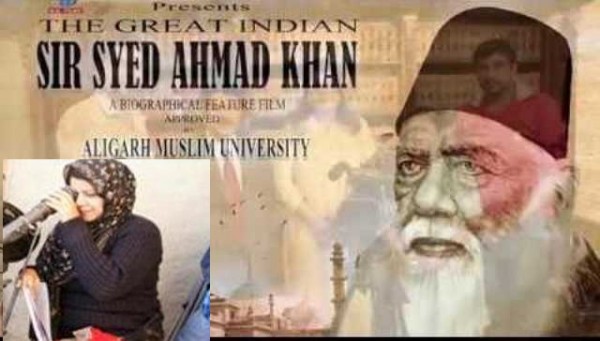 Neelofer Shama is a distinguished filmmaker having several critically acclaimed films, serials and documentaries-including a feature film “A Man’s Desire for a Fifth Wife” (selected in Boston International Film Festival) to her credit.

Starting her career in 1987 Shama was also one of the first independent producers of the country.

Her film company NS Films which has served on the panels of several reputed and esteemed government Ministries and educational institutions including Aligarh Muslim University and IGNOU is currently making a biopic of Sir Syed Ahmad Khan.

Significantly the biopic  ‘The Great Indian-Sir Syed Ahmad Khan’ will be made without any financial support of AMU but the producer has decided to donate the film to  Aligarh Muslim University , it shows the dedication and commitment of Neelofer with Sir Syed and AMU.

Here Neelofer Shama, a non Aligarian  opens her heart  about her fascination with  Sir Syed Ahmad Khan and the magnum opus project which aims to record the life and struggles of Sir Syed  for posterity world over.

Why a film on Sir Syed?

Sir Syed was a man who said that Hindu and Muslims are the two eyes of a beautiful bride called Hindustan. He had banned cow slaughter and stopped the use of leather bags for carrying water. He had gone to the extent of commemorating the bismillah ceremony (first education lesson) of his grandson by the hands of Raj Jai Kishen. Despite all of it he is considered a non-secular person. All his efforts to promote congenial existence had drawn from not just Muslim community in India but also from Mecca and Madina. Yet he continued to struggle. Its sheer irony that he is termed as the father of two nation theory.

The reason is that outside the university no one is aware of this great Indian. A visionary of unscalable calibre has been reduced into the four walls of a small university library. With this film, we want to take this secular educationist, this daring Visionary and Philanthropist to the masses.

How much has the film progressed?

In about eight months we have completed the research, screenplay and dialogues. It is always a challenging task to summarise the legacy of a legend in a three hour screen play but with the help of eminent scholars and authorities on Sir Syed like Professor Shan Mohammad, Professor Iftekhar Alam we have been able to develop the script. The script has been written by Mr. Tejender Sharma.

What other challenges are you facing in the process of making this biopic?

The journey till now has been testing. And we are completely aware the the journey ahead will be more challenging. This being a periodical costume drama we need to create huge sets depicting 19th century. As a director my biggest challenge will be to capture the journey of Sir Syed to London in the year 1869. We are dealing with a fund crunch as such films require huge budgets.

How long will the film take to complete?

Casting for the film will commence soon as we are planning to start our shoot in the beginning of the year 2017. It will be a 100 day schedule. As the year 2017 is also going to be the 200th birth year of Sir Syed Ahmed Khan so we aim to release the film in 2017. Its more of a reverse calculation. Time is of essence and we are working day and night towards this.

What do you want to say to our readers?

Today a lot of biographies are being made and the audience is pretty reseptive to this idea. This particular biography is a must because Sir Syed Ahmed an almost forgotten hero who stood up in the era of 1857 rebellion agaist the powerful English rule, in tactful manner should be remembered. A man who not only tried to pull the Muslims from the false superstitious world but also trie to bridge the gap between the communities. Most of his close friends were Hindus. His funders were Hindus Maharajas. The first graduate from his college was a Hindu. The story of such a visionary needs to be told.

Sir Syed made the MAO college (Now known as Aligarh Muslim University)  by collecting funds from people, he faced humiliation, detterance, angst, fatwas but people opposing him were far less in number and strength than people supporting him.

We also aim to make this film by collecting funds. We would, through the platform of MuslimMirror.com urge the readers to come forwards and suport us in this historic venture.

Neelofer Shama can be contacted at Email: nsfilms1@gmail.com