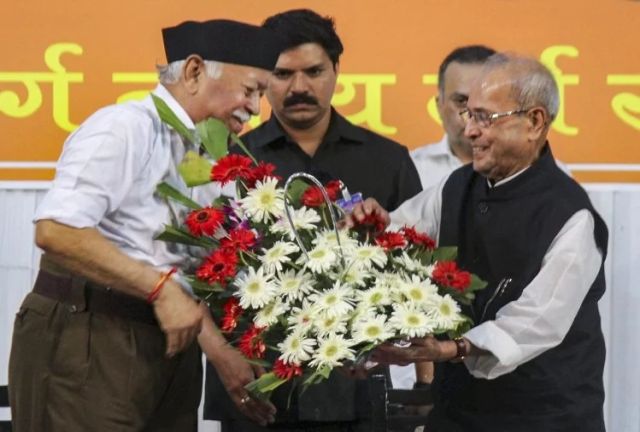 New Delhi : Hours after Congress leaders had slammed former President Pranab Mukherjee for attending an RSS event, the party on Thursday praised him for showing “mirror of truth” to the Sangh by reminding it of Indias pluralism, tolerance, secularism and inclusiveness as an article of faith and soul of the country.

The party also said Mukherjee reminded the Prime Minister Narendra Modi of his ‘Rajdharma’ and that “Indian nationalism is constitutional patriotism”.

Congress spokesperson Randeep Singh Surjewala also said in a statement that Mukherjee’s visit to RSS headquarters had caused wide ranging discussion, comment, concern and even consternation amongst a large section of Indians, who have an innate belief in foundational values of democracy, pluralism, and diversity.

His statement came soon after Mukherjee had delivered his nearly 30-minute address at the RSS headquarters during its third year annual training camp. Earlier, several Congress leaders including Mukherjee’s daughter Sharmistha Mukherjee, Ahmed Patel and Anand Sharma had slammed him for attending a Rashtriya Swayamsevak Sangh event in Nagpur.

“Pranab Mukherjee has shown the mirror of truth to the RSS at RSS headquarters in Nagpur by reminding them of India’s pluralism, tolerance, secularism and inclusiveness as an article of faith and soul of the country,” said Surjewala.

“He particularly highlighted the imperative need of freeing the public discourse from all forms of violence – physical and verbal, besides putting compassion, harmony and non-violence as the centre stage of our public life,” he added.

Surjewala said Mukherjee also reminded the Modi government of following ‘Rajdharma’, founded upon our diversity, non-violence, multiculturalism and assimilation of ideas, particularly that ‘happiness of people is the happiness of ruler, their welfare is his welfare’.

“Indicating the unchecked exercise of authority and attack on institutions in garb of a self-professed definition of ‘pseudo nationalism’, he reminded the RSS as also the prime minister that Indian nationalism is constitutional patriotism,” he added.

Noting that as Indians and as Congressmen, they encourage and believe in the democratic dialogue and recognise the tight and sanctity of dialogue across different thought processes, Surjewala asked: “Simple issue to understand, however, is – dialogue is possible in democratic order, with an open mind and willingness to change, accept and adapt to the other person’s point of view,”

Congress also wanted RSS to answer if “merely inviting the former President to an event will give it the much elusive social and political sanctity”.