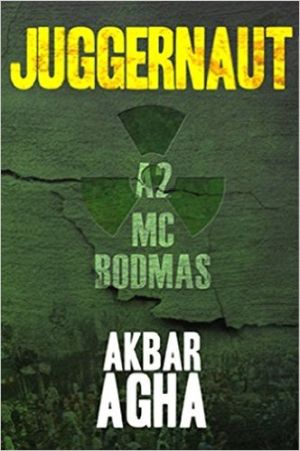 It is among the world’s greatest fears – Pakistan’s nuclear weapons slipping into hands of jihadis, or command over them with someone who shares their outlook. The country’s establishment asserts there is no danger of this with stringent measures in place to ensure the safety of their arsenal and monitor those who have authority over them. But are these effective enough?

As it happens, an assassination bid is made on a top Pakistani general but foiled and the assailant shot – and has time to utter one enigmatic word before dying. The next assassination bid however manages to claim another general’s life. Then the psychiatrist tasked with ensuring the well-being of those in the nuclear command loop goes missing, and is later found murdered with the cryptic equation “A2 MC Badmas” written in blood next to his body.

Meanwhile, the CIA seeks the Pakistani Army’s help to collar an American convert to Islam hiding in the Pakhtun heartland and purportedly involved in a plot to destabilize Pakistan but the agent on the case is soon found murdered in her hotel room. Meanwhile the foreign minister is mulling drastic measures to counter US drone attacks but her own life is set to witness upheavals and betrayals.

Is there a connection between all these, and what do they portend for the country and the subcontinent?

Capt. Gul Khan of the Pakistan Army, who is serving as ADC to foreign minister Sadia Sharif when he foils the assassination, is taken off and put on to probe and solve the conspiracy, with the help of CIA agent Eve who has her own motivations and objectives. But can he, or rather, will he be allowed to succeed and avert a nuclear holocaust?

This is the premise of Pakistani diplomat-turned-author Akbar Agha’s second book (after 2011’s “The Fatwa Girl”), set in a volatile and restive region in a unsettled time but also going back a few decades to underscore how some wounds never heal – and can infect the present too!

The story is quite timely and relevant, there are many resonances with Pakistan’s recent real-life polity – a young woman foreign minister, a president hailing from Sindh who exerts final political control on government matters, and so on – which provide the story a certain verisimilitude, and the depiction of the military and diplomatic component bears hallmark of someone with experience.

The characters are also realistic and the usual rants about nationalism and religion do appear but seem apt, given where they emanate from!

What doesn’t work are a tad too excessive use of pop culture to highlight discoveries (or help characters solve conundrums), the gratuitous sex (including one unexpected fantasy) which is somewhat distracting from the taut narrative, a few implausibilities in the buildup to and the denouement itself, and a rather theatrical, unresolved ending.

But on the other hand, the author shows quite some initiative in forsaking predictable plot devices for something new, even if it does not mesh perfectly, or seems a little unbelievable.

And then, a few unresolved points at the end can leave scope for a sequel given the characters are too good to be allowed to go into the literary limbo right after their debut.

(Vikas Datta can be contacted at vikas.d@ians.in)—IANS