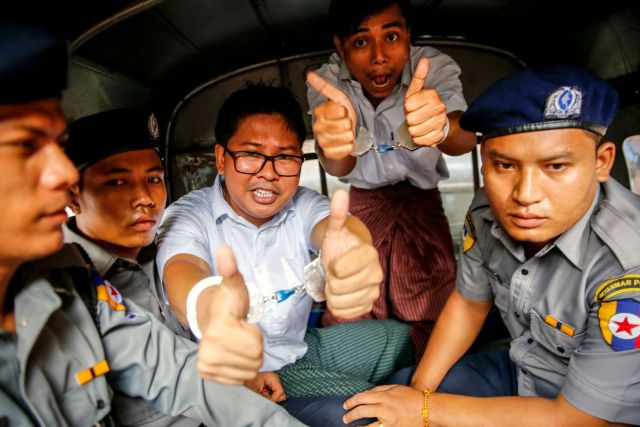 Yangon : Two Reuters reporters were jailed on Monday for seven years for violating a state secrets act during their reporting of the Rohingya crisis, a court said, in the case that has drawn outrage for its attack on media freedom.

The two journalists were being tried since 2017 for breaching Myanmar’s Official Secrets Act while investigating violence against the Rohingya Muslims in the Rakhine state by the army, the BBC reported.

Reporters Wa Lone and Kyaw Soe Oo were arrested on the night of December 12, after meeting with two police officers who, according to the defendants, handed them confidential documents, the Efe news reported.

Since then, both have been held without bail and have appeared 30 times before the court, which started a preliminary investigation on January 9 and formally filed charges on July 9.

The case has been widely seen as a test of press freedom in Myanmar.

The journalists have maintained their innocence, saying they were set up by the police.

“I have no fear,” Lone, 32, said after the verdict. “I have not done anything wrong. I believe in justice, democracy and freedom.”

The two men, who both have families with young children, have been in prison since their arrest in December 2017.

Judge Ye Lwin told the court in Yangon the pair had “intended to harm the interests of the state”. “And so they have been found guilty under the state secrets act,” he said.

Lone and Soe Oo, 28, had been collecting evidence about the execution of 10 men by the army in the village of Inn Din in northern Rakhine.

During their investigation, they were offered the documents by two police officers, but were arrested immediately afterwards for the possession of those documents.

Authorities later launched their own probe into the killings, confirming the massacre took place and promising to take action against those who had taken part.

The BBC said that many would see this verdict as a crushing blow to freedom of the press in Myanmar and another setback for the democracy, three years after Aung San Suu Kyi’s party triumphed in free elections.

He said Lone and Soe Oo bowed their heads as the verdict was delivered. Wa Lone – who has missed the birth of his first child while being detained — protested his innocence once again as he was led away.

“We are extremely disappointed by this verdict,” Britain and the US have said, saying the court’s decision was “deeply troubling for everybody who has struggled so hard here for media freedom”.

The UN’s resident and humanitarian co-ordinator in Myanmar Knut Ostby said the UN had “consistently called for the release” of the journalists and that “a free press is essential for peace, justice and human rights for all. We are disappointed by today’s court decision”.

“These sentences mark a new low for press freedom and further backsliding on rights under Suu Kyi’s government.”

The verdict comes a year after the crisis in Rakhine state came to a head when a Rohingya militant group attacked several police posts. The military responded with a brutal crackdown against the Rohingya minority.

The UN has said leading army figures in Myanmar should be investigated and prosecuted for genocide.

Media access to Rakhine is strictly controlled by the government so it is difficult to get reliable news from the region.