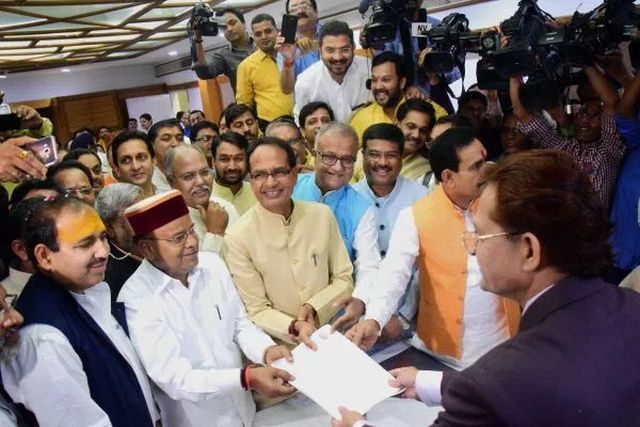 New Delhi : Samajwadi Party’s Rajya Sabha member Naresh Agrawal, who has changed parties frequently in his three-decade-old political career, on Monday joined the BJP here and straightaway stoked a controversy saying “film actor and dancer” Jaya Bachchan has been preferred over him for candidature by the SP in the upcoming elections to the Upper House, remarks which were denounced by External Affairs Minister Sushma Swaraj.

Union Minister Piyush Goyal, who held a press conference to announce the entry of Agrawal at the party headquarters, and BJP spokesperson Sambit Patra were visibly embarrassed by the remarks. Patra sought to contain the damage by calling an end to the briefing before saying that BJP respects the contribution of every individual whichever field they work in.

However, Swaraj termed his remarks “improper and unacceptable”.

“I was compared with a person working in the films… I was rejected for those who dance in films, work in films. I found it not proper. Nobody found it proper,” said Agrawal, who is set to retire from the Rajya Sabha on April 2.

He was referring to the re-nomination of renowned film actor Jaya Bachchan by the Samajwadi Party for yet another Rajya Sabha term from Uttar Pradesh in the coming biennial elections, ignoring Agrawal’s claim.

With its reduced strength in the Uttar Pradesh assembly following assembly elections last year, the Samajwadi Party is in a position to win only one Rajya Sabha seat from the state.

Sushma Swaraj conveyed her disapproval of Agrawal’s remarks in a tweet. “Shri Naresh Agarwal has joined Bharatiya Janata Party. He is welcome. However, his comments regarding Jaya Bachchan ji are improper and unacceptable,” she said.

During the press conference, Agrawal also announced that his son Nitin Agarwal, who is a Samajwadi Party MLA, will vote for the BJP in the biennial elections to the upper house.

He described his joining the BJP as “homecoming” and said he would unconditionally do whatever the party wanted him to.

“I have not joined the Bharatiya Janata Party for any Rajya Sabha ticket, nor have I set any condition.”

Agrawal, who has been one of the most vocal critics of the Narendra Modi government and the BJP in the Rajya Sabha in the last few years, lauded the Prime Minister and BJP chief Amit Shah.

“I am inspired by the Prime Minister and Yogiji. The fact that one after the other all states are going to BJP proves that the entire country is with Prime Minister Narendra Modi’s leadership,” he said.

Agrawal also said he felt that he cannot serve the entire country till he was in a national party.

Referring to Samajwadi Party leaders Mulayam Singh Yadav and Ram Gopal Yadav, Agrawal said he will continue to respect them for the regard they had given him.

Agarwal, who belongs to the trading community, also referred to the traditional support of the community to the BJP. ”

“My society is already with BJP. My community people will be very happy today that Naresh has come to his original place,” he said.

Agrawal, who had been an MLA several times and a minister in Uttar Pradesh, has often changed parties in the last over 30 years of his political career. He has also stoked controversies.

Agrawal had earlier been with the Loktantrik Congress Party with Jagdambika Pal that allied with the BJP government headed by Kalyan Singh in Uttar Pradesh in 1997.

He also served as a minister in the Kalyan Singh, Ram Prakash Gupta and Rajnath Singh regimes.