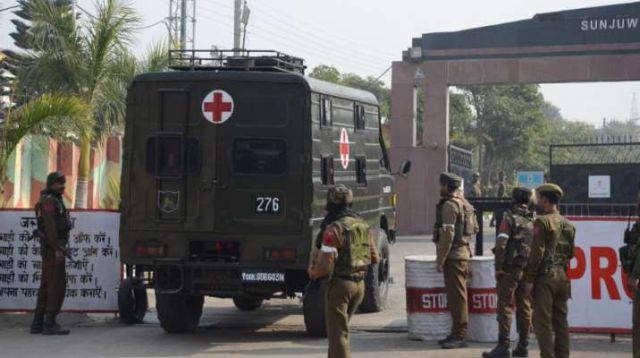 Jammu : The death toll in a terror attack on an Army camp in Jammu and Kashmir was put at nine on Sunday as Army chief General Bipin Rawat arrived here to review the anti-terrorist operation at the site.

Reviewing earlier casualty figures, Defence Ministry spokesman Colonel Devendra Anand said three terrorists had been killed in the fighting that broke out before dawn on Saturday at the Sunjuwan Army station in Jammu city.

Earlier reports said four terrorists were killed, but the spokesman said he could confirm the killing of only three attackers. According to him, all the attackers were in Army fatigues.

“Five soldiers have been martyred in this operation. The father of a soldier also lost his life. So far, we have killed three terrorists,” Col Anand told the media. All the five soldiers killed belonged to Jammu and Kashmir.

“Search and sanitization operation is still on inside the camp. AK-56 rifles, a grenade launcher, ammunition and grenades have been seized from the dead terrorists,” Col Anand said.

Ten other persons, including six women and children, were injured in the attack.

The spokesperson said Army doctors worked through the night to save the life of a severely injured pregnant lady who delivered a baby girl through Caesarian surgery.

A 14-year-old boy with a gunshot wound in the head remains critical, he said.

Asked if more terrorists could still be holed up inside the camp, the official neither denied nor confirmed the possibility. The fighting has lasted more than 30 hours.

The audacious attack was blamed on the Pakistan-based Jaish-e-Muhammad militants who sneaked into the Army base station around 4.45 a.m. on Saturday.

The terrorists — whose nationalisty is not known — entered the Junior Commissioned Officers (JCOs) quarters while everyone was asleep.

Para-commandos from the Army’s Udhampur-headquartered Northern Command were flown to flush out the militants. The Air Force provided aerial surveillance.