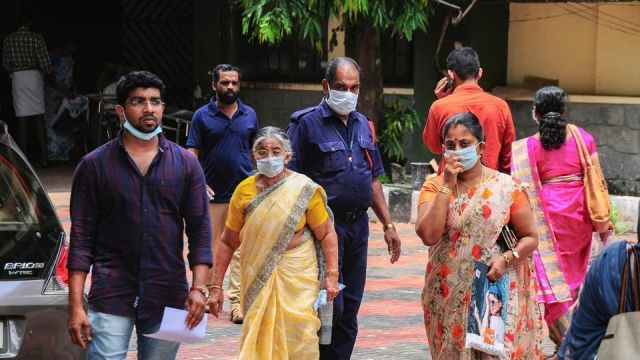 Thiruvananthapuram : Kerala Health Minister K.K. Shailaja on Wednesday said that the outbreak of Nipah virus (NiP), which has claimed 10 lives, has been contained and there was no need to panic.

Seventeen people are being treated at the Kozhikode Medical College Hospital. The disease has been confined to Kozhikode and Malappuram districts.

But the minister said two new cases of patients with suspected NiP and fever were reported in Kozhikode and they were under observation.

Shailaja told the media here that though the virus had been contained, there was a need be alert.

“The entire expenditure of these patients would be borne by the state and there need not be any panic over bats. The government is awaiting the supply of ribavirin, a drug that’s commonly used for treating similar cases,” she said.

Meanwhile, three teams of health experts deputed by the Centre are working in Kozhikode along with various teams of the state government, officials said.

After presiding over the cabinet meeting, Chief Minister Pinarayi Vijayan on Wednesday announced an ex-gratia payment of Rs 5 lakh each to the families of the dead.

“We have also decided to give a government job to the husband of the nurse Lini who died after attending to Nipah virus patients in Perambra in Kozhikode,” he said.

“Their two children will be given Rs 5 lakh each and this can be withdrawn when they turn 18,” a statement issued by Vijayan’s office said.

Meanwhile, following a complaint from the state Health Department, the Cyber Police here registered a case against misuse of the social media with lots of fake news being circulated with regards the outbreak of the virus.

State Police chief Loknath Behra had earlier warned against dissemination of false information and news regarding NiV, saying strong action would be taken against such people who resort to it.

As the Health department on Wednesday approached police with a complaint, a case was registered but any violators are yet to be named.

Transmission of NiV takes place through direct contact with infected bats, pigs or from other NiV-infected persons.