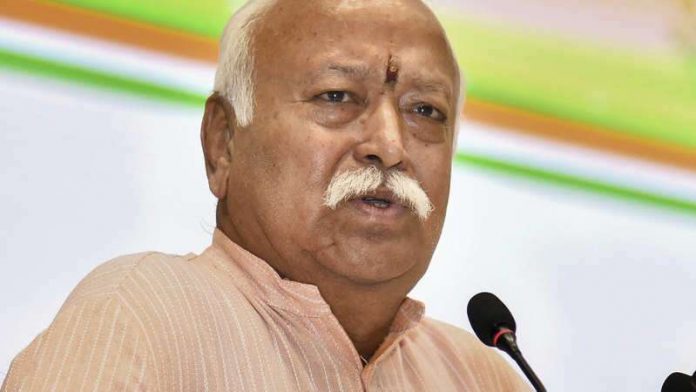 Rashtriya Swayamsevak Sangh (RSS) chief Mohan Bhagwat on Saturday said that there is no India without Hindus and there are no Hindus without India.

He further stressed that India and Hindus cannot be separated.

“There is no India without Hindus and no Hindus without India,” Mr Bhagwat said at an event in Madhya Pradesh’s Gwalior.

“India stood on its own. This is the essence of Hindutva. For this reason, India is the nation of Hindus,” he added.

The British rewrote India’s history and the original needs to be reclaimed, Rashtriya Swayamsewak Sangh (RSS) chief Mohan Bhagwat said on Saturday, asserting that Hindutva needs to be strengthened for a stronger society.

“Hindu is Bharat, Bharat is Hindu and this needs to be strengthened because the British rewrote our history and changed our original identity,” Bhagwat said while addressing a programme in Gwalior.

“The nomads whom the British called criminal and we notified after Independence were workers of saint and seers. They were part of a campaign of giving glory to society. Hindutva cannot be separated from Bharat and Bharat from Hindutva. This thinking made us special but the British came and rewrote the history of India. The British had written that our ancestors were not there before 15 generations. Because there is no Hindu in history means there is no India. Akhand Bharat has broken now,” he added.

“When Pakistan was formed, we were not told that we become Bharat and Hindustan; you put another name because they knew that Bharat is Hindu and Hindu is Bharat. Akhand Bharat has been divided where Hindus are weak. Still, if we see the places in India where people are in problem and where the integrity of the country is under threat, those are places where Hindus are weak, where the thought of Hindutva is weak. We have to keep our soul alive, that’s why Mohammad Iqbal said there is something that we never lost our identity.”

“It’s a gimmick to gain a foothold among the Muslim masses,”: Experts on Mohan Bhagwat’s statement on lynchings