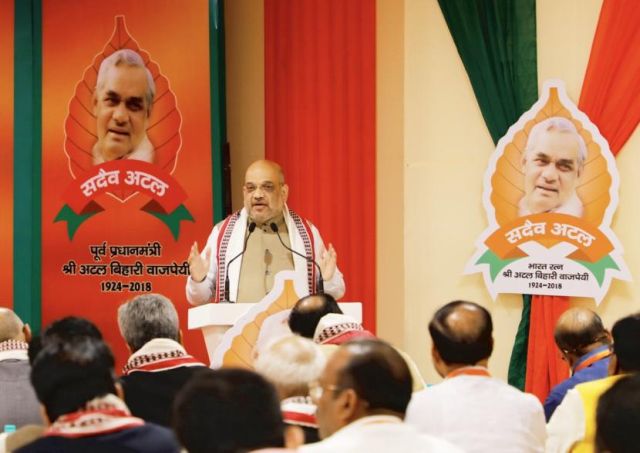 New Delhi : Describing the coming Lok Sabha elections as a “battle of two ideologies”, BJP President Amit Shah on Friday hit out at the proposed opposition grand alliance describing it as an “eyewash” and attacked the coming together of the SP and the BSP in Uttar Pradesh because they have realised that they cannot defeat Prime Minister Narendra Modi on their own individually.

Asserting that 2019 will be a year of expansion for the BJP, he said Modi was leading the NDA that has 35 parties, the opposition does not have either a leader of a policy.

Sounding the poll bugle at the inauguration of the party’s two-day National Convention, he asked the BJP workers to resolve to bring Modi back to power in the general elections saying the people of the country will elect a “mazboot sarkar (strong government) and not a “mazboor sarkar” (compromising government).

Under pressure from the RSS and other members of the ‘Sangh Parivar’, Shah utilised the opportunity to assert that the government is keen on the construction of a grand Ram Temple in Ayodhya in accordance with Constitutional norms but accused the Congress of creating hurdles.

“This ‘mahagathbandhan’ (grand alliance) is an eyewash. Everybody is fighting for their survival. We defeated them in 2014 and it is time to defeat them again. Politics is not physics but chemistry in which when two compounds meet they can lead to unintended consequences. They have come together for their self interest and for power. This is a battle that will have a far-reaching impact for centuries to come. It is necessary to win it.”

Touching upon the proposed alliance between arch rivals in Uttar Pradesh, the BJP President asked “if bua-bhatija’ (aunt-nephew) come together what will happen. They did not want to see each other’s face a few months back. They cannot sit together.”

“We are ready to fight the battle to get over 50 per cent vote share in Uttar Pradesh. We will get not less than 74 seats (one more than what the BJP and its allies got in 2014). They have united because they cannot defeat Modi on their own. This is acceptance of our strength, of the strength of Prime Minister Modi,” he said.

“There was a time when it used to be Congress versus all. Today it is a matter of pride that it is Modi versus all. He is a pole of Indian politics on the strength of his hard work,” he said.

Calling upon the BJP workers to take a resolve for the re-election of Narendra Modi as Prime Minister, Amit Shah compared the 2019 Lok Sabha elections to the third battle of Panipat.

Shah said the party was gaining momentum in Odisha and West Bengal and he was personally keen to see a BJP government in Kerala.

Referring to the contentious issue of the Ram Temple, he said it was being said that the party has deviated from its earlier words.

“The ideology with which we started in 1950, the journey is continuing in the same direction. The BJP wants that Ram Temple should be constructed at the earliest and a grand temple should be built at Ayodhya. We are trying that the issue is settled soon as per constitutional norms. The matter is pending in the Supreme Court. Congress is creating road blocks. We were and are committed for Ram temple,” he said.

He laid out the issues that will be the campaign themes of the party in the next three months including upper caste job reservation and welfare measures for the poor including toilets, gas, housing, Ayushman Bharat and financial inclusion.

Shah accused Congress President Rahul Gandhi of “manufacturing” allegations of corruption in the Rafale deal and talked of surgical strikes and said Modi had enhanced India’s stature in the world.

Speaking of the rise of the Marathas under Shivaji and subsequent warriors, he said they lost in the Battle of Panipat in 1761 and the country later came under the rule of the British for 200 years.

“That was a decisive battle. Today the situation is the same. The country’s politics saw several ups and downs in the last 70 years. The BJP started its journey from Jan Sangh and got full majority in 2014 under Narendra Modi. In 2014 we were in power in six states, today we are in power in 16,” he said.

He said the Modi-led government was transparent, decisive, sensitive and based on democratic values.

“When we went for election in 2014, we had cadre. Today we have nine crore active workers. There are 22 crore beneficiaries of government schemes. Last time people wanted to give Modi a chance, this time we are fighting on the basis of his performance.”

“We have leadership of the most popular, hardworking, transparent and visionary leader. I am working with him since 1987. He has never been defeated. There is no question of stopping. We will again make a full majority NDA government in 2019.”

He urged the people to have faith in Modi again and said no one else can give a strong government.

He said the Modi government had a “spotless record” and attacked Rahul Gandhi and his mother and UPA chairperson Sonia Gandhi.

“Those who are on bail and are facing income tax notices are making allegations of corruption against us. People of the country are not going to believe this.”

He said the Supreme Court had said that there was no need to probe the Rafale fighter deal and answers were given in parliament but Rahul Gandhi was still making allegations.

“What is this frustration. Five years are about to end. If they do not rake up allegations, how will they fight. They (the Congress) has indulged in corruption in every defence deal. If Michel mama is caught, they start sweating.”

“The history of their four generations is marked by corruption and you are making allegations against us.”

Referring to fugitive economic offenders Nirav Modi, Mehul Choksi and Vijay Mallya, he said they were “in comfort” during the UPA rule but were forced to flee when the Modi government came to power.

“Chowkidar will bring all the thieves. It is only a matter of time. They will have to return the money pending against their names,” he said.

He said India is the fastest growing economy and the government had implemented its promise of giving farmers prices at 50 per cent over their input cost.

Shah said the NDA had made a difference to the lives of the poor by providing a record number of houses, toilets, banking, electricity and gas connections in the last five years.

He made repeated mention of the bill to provide 10 per cent reservation to the economically backward sections among the upper castes in education and government jobs and said the poor among the general categories will get their first opportunity for a slice of the pie of reserved government jobs.