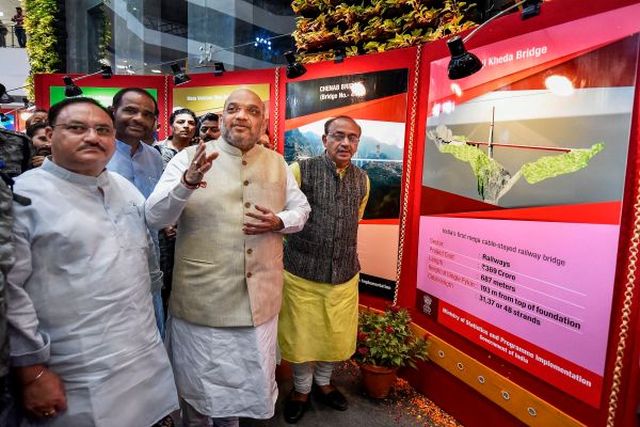 New Delhi : BJP President Amit Shah on Saturday said opposition parties coming together against the ruling combine would make no difference to it in the 2019 Lok Sabha elections and expressed confidence that Prime Minister Narendra Modi would be elected again.

Addressing a press conference on the completion of four years of the NDA government, he said virtually the choice for the voter would be between Modi and an unknown face on the other side.

He also made light of Congress President Rahul Gandhi’s remarks that he was ready to be Prime Minister if his party emerges as the biggest group.

Replying to a question about the coming together of opposition parties after the Karnataka Assembly elections against the the Bharatiya Janata Party, Shah said: “They fought against us in 2014. They were united. They are the leaders of their regions.

“If Mamata (Banerjee) and (Chandrababu) Naidu come together on one platform, what difference it makes in Bengal and Andhra Pradesh?

“If (Sitaram) Yechury and (H.D.) Kumaraswamy come together what difference will it make to Bengal and Karantaka politics? It doesn’t work like that. They are all regional leaders and contested against the BJP.

“Mamata, Akhilesh (Yadav), Mayawati, Sharad Pawar and Rahul (Gandhi)… they all fought against us. They are main opponents (of the BJP) in their state. Others don’t matter there.”

Asked about the series of reverses the BJP had suffered in Lok Sabha by-elections, he said voting in by-polls is different from general elections and still one year was left for the Lok Sabha polls.

“When a voter casts his vote to form government keeping in mind who will be the Prime Minister whether Narendra Modi or someone else, the parameters will be different from the by-elections.”

Replying to a question about Gandhi’s candidature as Prime Minister, he said: “It doesn’t matter as to what I think. His party has not supported him when he said he wants to be Prime Minister. Neither did Sharad Pawar support him nor did Mamata or Akhilesh Yadav.”

In his opening remarks, Shah said he expected people to re-elect Modi in 2019.

He said the NDA government, which replaced politics of appeasement with development for all, will provide houses to every citizens by 2022.

Stressing that BJP is committed to work for the uplift of the Dalits, the poor and the farmers in the country, he said that the Opposition is spreading lies only to remove Modi.

Highlighting the Modi government’s work, Shah said: “We have benefitted 22 crore people with several schemes”, while the country’s self-pride has been restored and its status globally taken to the highest level.

He said when Modi government took office, people of the country had lost their faith in the multi-party democracy system, but this was also restored.

The BJP leader also said that the Modi government has taken concrete steps in every sector and shown that a government can be both pro-farmer and pro-industry.

The BJP, he said, had the distinction of giving a government free of corruption capable of “taking decisions for the poor and farmers”.

“We expect the people to vote Prime Minister Modi back to power with a full majority,” Shah said.