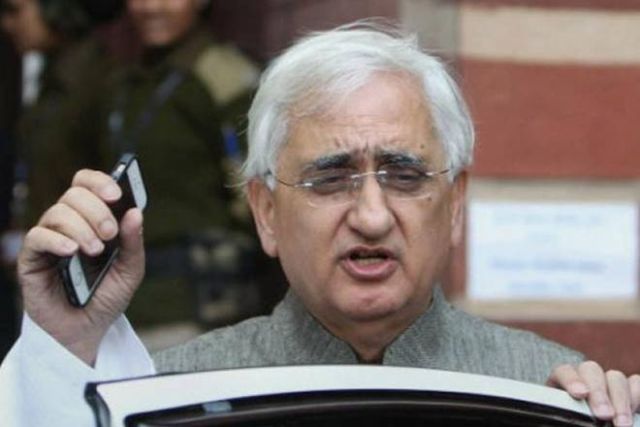 New Delhi : Opposition parties should strive to field a common candidate against the ruling National Democratic Alliance (NDA) in each constituency in the next Lok Sabha polls and alliance talks among them should start early to allow workers to align themselves, according to senior Congress leader Salman Khurshid.

He also asserted that Congress President Rahul Gandhi is the party’s obvious choice as prime ministerial candidate in the Lok Sabha polls, but any announcement would have to wait for the outcome of alliance talks among opposition parties.

“As far as I am concerned and our party is concerned, the choice is obvious. But till such time, in case there is a larger collaboration and alliance, courtesy demands that we wait till that announcement is made by the alliance. But for us it is very clear. Rahul Gandhi is very clearly the person for the job and who would lead from the front,” Khurshid told IANS in an interview.

He was asked if there should be a declared opposition candidate against Prime Minister Narendra Modi in the 2019 general election.

The former Union minister, whose latest book “Triple Talaq: Examining Faith” has hit the stands, said there has been severe erosion in Modi’s credibility.

“I think there is severe erosion taking place as far as Mr Modi’s credibility is concerned, but I won’t say that the erosion is adequate yet. There is a slide, and erosion continues,” he said.

Asked about the possibility of an opposition alliance coming about against the NDA, he said: “It is difficult to say right now, but if an alliance does not happen, we will all be very sorry for losing an opportunity.”

He said discussions were quietly taking place at various levels. “There is a realisation in all parties that it is a very important turning point for Indian history. I think the ego barriers of the past do not exist any more. But it still requires a lot of footwork. Somebody quietly has to take that initiative. I can’t say who will finally be the person who will do it. But quietly, discussions are going on,” he said.

On fielding one common opposition candidate against the NDA, he said it is too early to say that. “But I hope it is something of that nature. It is a very complex and complicated picture, and to make simplistic predictions is not very advisable, not at this stage.”

On reconciling differences among competing players in Uttar Pradesh, his home state, which sends 80 MPs to Lok Sabha, Khurshid said internal antagonisms had lowered considerably after the last parliamentary elections. “Let us see if that can go to a natural conclusion.”

Asked about the timing for formal talks, he said the sooner the better.

“I think it is never too early. Though a lot of people do believe that it will give BJP more time to work against it, I think experience of some alliances of the past is very clear that if you leave it too late, then it becomes very difficult for workers to align themselves. There is a certain time that workers need to align themselves and that needs to be factored in.”

Asked about Sonia Gandhi playing a leading role in bringing opposition parties together, he said: “She has a larger-than-life presence in the spectrum of liberal politics. I can’t see things happening without her intervention, guidance and blessings.”

On the possibility of West Bengal Chief Minister Mamata Banerjee playing a cementing role, Khurshid said anyone can do it.

“But that’s a role in which you need to be willing to sacrifice. If you want a win-win situation, you may get the win-win situation, but you may not be able to do the kind of things that it takes for a leader with broad shoulders to do.”

On the minimum seats the Congress should contest in Uttar Pradesh, Khurshid said that Congress would have a much larger contribution to make across the country.

“Therefore, keeping that in mind, I would think for parliament working on par is a good formula (for UP). But no rigid formulas should stand in the way of an overall settlement if we are to save this country from fate worse than we can imagine.”

On the idea that the lead party in each state should take on the BJP, Khurshid said: “That’s one suggestion. There are many ways of looking at it. Some principled position needs to be taken and then, working around that position, adjustments can be made.”

Khurshid said there will be a revamp in the party with Rahul Gandhi making “it very clear that he is going to give a strikingly new Congress set-up”.

The former External Affairs Minister admitted that the Congress faces a tough task in the forthcoming assembly polls in the northeastern states of Tripura, Meghalaya and Nagaland, but said the party had good prospects in other poll-bound states.

(Prashant Sood can be reached at prashant.s@ians.in)