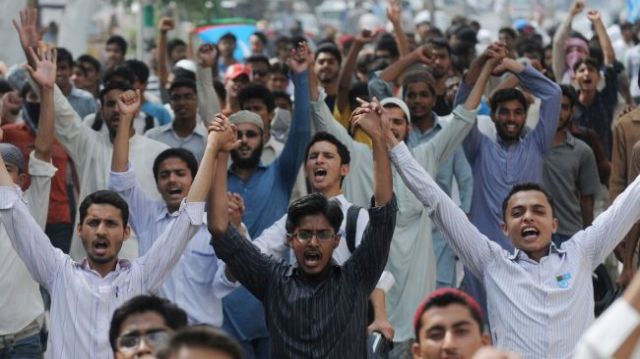 15th National Assembly elections, held on the 25th of July, in Pakistan, is historic, notable and sceptical. Former cricketer-turned-politician Imran Khan emerged victorious in the elections marred by rigging and military interference. Of late, European Union observers, too expressed discontent at the counting carried on by Pakistan Election Commission (PEC). No doubt, Pakistan Tehreek-e-Insaaf Party (PTI) conducted turbulent campaigns and left no stone unturned to win the elections. However, a series of events unfolded before the D-day which reportedly proved to be desirous for Mr. Khan. A cursory view of what all proved overwhelmingly beneficial and prepared the right recipe for PTI to triumph, is considerable.

The incumbent Pakistan Muslim League – Nawaz (PML-N) got elected to power in 2013 with much uproar. While it promised its citizens a democratic, peaceful and stable Pakistan, it assured rapprochement with India over Kashmir issue. The bonhomie between the two neighbours was received with great appreciation from all corners of the world. Ostensibly, the government seemed to be on track. Democracy was knocking the doors of Pakistan once again with multitude of benefits as respects economy, defence and trade. However, the government was destined to repeat the blunder what its predecessors had committed.

In a jiffy, Panama Paper Leaks doomed the career of Nawaz Sharif, the former PM of Pakistan. He and his daughter, Mariam Sharif have been sentenced to 10 years of imprisonment on the charges of corruption and money laundering. They comfortably submitted themselves to the law of the land, expecting better gains in the future. The entire case has been mired in conflict as many claim that it is the thoughtful decision of the judiciary which is hands in glove with the military & ISI (Inter-Services Intelliegence). The Chief Justice of Pakistan, Saqib Nisar, on the diktats of the latter, pronounced the judgement after rushing through the hearing. Nawaz Sharif exclaimed in anguish “Justice rushed is Justice Crushed”!! This entire episode, whether fixed or not, proved right for Imran Khan.

Pakistan Tehreek-e-Insaaf (PTI) carried on widespread campaigns with ‘Naya Pakistan’ (New Pakistan) being the fulcrum of the entire election manifesto. He promised his countrymen to build a ‘Naya Pakistan’ which he defined to be corruption-free and stable. He laid great emphasis in his speeches on improving educational and health infrastructure, generating employment through development of tourism in the picturesque valleys and mountain ranges and bringing in investment for industrial development and agricultural modernisation. “Education and healthcare for all” were the big ticket promises during the election campaign which made Pakistan Tehreek-e-Insaaf (PTI) stand apart from Pakistan Muslim League-Nawaz (PML-N) and Pakistan People’s Party (PPP).

The country possessing 65% youth in its 200 million population became hopeful with the idea of a New Pakistan. The song turned out to be quite popular among ‘youthias’ (young and first-time voters), within no time with “Jab aayega Imran sabki jaan…Badhegi iss qaum ki shaam…Ban gaya naya Pakistan” becoming the theme song of the nation. The youth voted for PTI in huge numbers.

The corruption-free mantra gave an edge to PTI as being a new party in Pakistan, PTI has nearly zero baggage of corruption unlike PML-N and PPP which have been drenched in the charges of corruption scandals. He repeatedly launched offensive attacks against Nawaz Sharif and Bhutto Zardari family on this pretext.

PML-N’s core constituencies, Lahore and Faisalabad, went into PTI’s kitty. Adding another feather to its crown, PTI became the first party to be re-elected in Khyber Pakhtunkhwa province, increasing its seats. Muttahida Qaumi Movement (MQM) led by PML-N in its stronghold Karachi turned out to be a complete failure.

On the popularity front, he has posited himself with a charismatic image of a megastar cricketer, a socialite, a humanitarian, an upfront politician and a conservative Muslim nationalist with a Tasbeeh (rosary) in his hand. Many see him as their hero and call this election as a watershed moment in the history of Pakistan.

However, Imran Khan’s ‘New Pakistan’ has no place for blasphemous individuals and Ahmadiyas (Muslims considered as heretics by hardliners). His overt support for the far-right groups in Pakistan furthered his dream of becoming the Wazir-e-Azam. He did not hesitate in favouring dialogue with Taliban and other such fundamentalist groups. He has even assured to bring these terror outfits to the table.

As far as foreign policy is concerned, Imran Khan has taken an anti-India, anti-US stand throughout his campaign. Although he is ready to take two steps forward if India takes one in Kashmir issue, it is left to be seen how and what actualizes on the border issues.

Imran Khan is of the view that military doesn’t create problems in the working of the civilian government if the latter is morally upright. One doesn’t know how far his belief is true but he has supported Pakistan Army on the Kashmir issue saying that Kashmir could not be resolved without the support of the Pakistan Army, which continues to stick to the policy of “a thousand cuts”. Undoubtedly, Imran Khan’s victory may bolster Pakistan Army to sponsor and ISI to finance terrorism in Jammu and Kashmir with far more aggression and hostility.

Recently, Pakistan army has been accused of killing Haroon Bilour from Awami National Party (ANP) in a suicide bombing. Bilours have been opponents of Taliban from very long. This entire incident sends shock waves down the throat as it is reflective of the aggrandisement of military in deciding the head of the government. It also indicates that Imran Khan is the chosen candidate of the military.

For Imran Khan, challenges galore with prime ones being, repayment of loans to China which had been taken in development of China-Pakistan Economic Corridor (CPEC), negotiate assistance from International Monetary Fund (IMF) to stave off a balance of payments crisis, crack down on terror groups and start dialogue with Taliban. Tackling terror groups inside Pakistan will pose a serious challenge before the new government. Last but not the least, becoming the first PM to complete a full term will be the toughest of all.