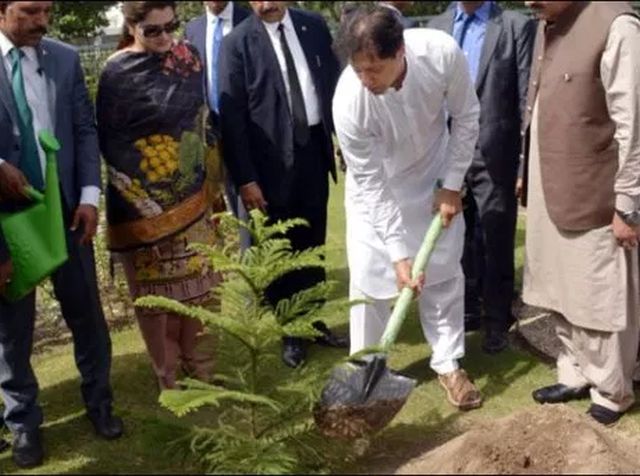 Islamabad : Pakistan on Sunday kicked off the “Plant for Pakistan” campaign by Prime Minister Imran Khan who in the drive planted a sapling in the country’s Khyber-Pakhtunkhwa province.

The campaign “Ten Billion Trees Tsunami” aims at combating the effects of climate change by planting over ten billion trees across the country during the five-year tenure of the current government.

After planting the sapling, the prime minister took to twitter to motivate people to plant trees. “Today we launch our tree plantation drive #Plant4Pakistan across the entire country. I want everyone to join this #GreenPakistan drive so we can counter the twin threats of climate change and pollution confronting our future generations,” the Prime Minister tweeted.

Khan’s advisor on climate change Malik Amin Aslam said that trees were planted and distributed freely across the whole country with an objective to motivate the general public to make Pakistan greener.

An estimated 1.5 million trees will be planted in the first phase in various cities of the country including the capital city Islamabad, by students, government employees, workers of Imran Khan’s political party Pakistan Tehreek-e-Insaf and volunteers.