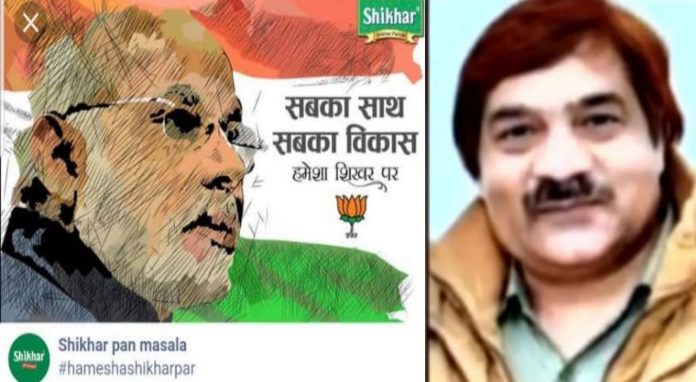 The GST intelligence, from Ahmedabad, Gujarat, raid on a business-man engaged in perfume/pan masala business in Kanpur/Kannauj, UP continued for seven days, in which it is said that GST recovered more than 194 Crore apart from 23 kgs of gold etc, and this can come nothing as a surprise as Indians have always been the society where ‘hoarding money and gold ’ is a civilizational trait. The issue is tax evasion and more than it has been the politics over it. The BJP in its rush to grab the issue, termed the concerned person Peeyush Jain, to be that affiliated with Samajwadi Party (SP), which is also quite normal, but what becomes alarming is that nation’s PM Narendra Modi started to make a noise on it.

Does it behoves of rank of a PM to engage into ‘talking’ over a raid? But surely yes, if it is to outscore an opponent, as he along with BJP CM of UP AS Bisht were in Kanpur on December 28 and PM started to make an immediate swipe at SP over the same. He said the people of UP know for a fact that the “perfume of corruption has been sprinkled” all over the state, in a purported dig at SP. “Boxes filled with notes that have come out, I was thinking they (SP) will say that this was also done by us. The people of Kanpur understand business and trade well. Before 2017, the perfume of corruption that they had sprinkled all over UP is there for everyone to see,” He further added, “But now, they are sitting with their mouths shut. They are not coming forward to take credit for the mountain of currency notes seen by the entire country. This is their achievement and their reality. The people of UP are seeing and understanding everything and hence, they are with those who are working to take the state forward.” AS Bisht also uttered a similar language and Union Home Minister Amit Shah even took to figure to 250 Crore attributed to SP.

All the three- PM, HM and CM were in fact ‘spinning the wrong urn’ and ‘barking on the wrong tree’ as it has come out that Peeyush Jain had always been Modi’s organ! His run Shikhar Pan Masala Facebook page, which has now got deleted, has shown the real perspective. His Instagram page has also been deleted. Actually, BJP had been tuning the ‘agencies’ on a raiding spree as in the last about a fortnight, there had been raids on persons who were close to SP. There was nothing what could be called a ‘big-catch’ recovered from there, and SP Chief Akhilesh Yadav, called the exercise to subdue the morale of SP which has been on a high, ever since more as Akhilesh Yadav has undertaken Vijay Rath Yatras through Jaunpur, Jhansi, Muzaffarnagar, Rae Bareli, Mainpur-Etah and now in Unnao on December 28. This raid in Kanpur, which is adjacent to Unnao, was planned in view of Akhilesh Yadav visit there, and it turned-out to be a farce of BJP’s Digital-India, as what Akhilesh Yadav has termed it, as SP MLC Pushp Raj Jain was in fact the real target, as he had earlier launched a Samajwadi Party perfume, and in order to pull-the-strings on him, this whole operation was planned but it boomeranged as BJP wrongly pounced-on-its-own-man; Peeyush Jain.

As long as raid was going-on, AS Bisht was crying full-volume about the money recovered from the walls etc, irrespective of the fact that the last five-years BJP had been in office, and every small-smaller BJP politician, from the gullies (alleys), of Lucknow, were putting-on with consonance, but since it has occurred that Peeyush Jain was a BJP associate, AS Bisht and his entire coterie has gone mute! There is also a deafening silence from Modi too. Is it not necessary to correspond it with another news trickling from Madhya Pradesh, where there is also a so-called double-engine BJP government, that BJP parliamentarian Guman Singh Damore, has been accused of a 600 Crore hand-pump scam. BJP is a party of scamsters? Any doubt left for it?

Since, the BJP move has backfired as BJP’s own protégé has been caught, now a reverse-engineering is being orchestrated. The hoarse claims that such vast wealth was a huge lump of black money, needless to point-out here, the most maverick decision ever to have been taken in India aka demonetization, in which BJP had claimed (sic) that it would stop black-money hoarding, that now BJP wants to save Peeyush Jain. All the media houses, with one or two exception, which were gung-ho over lampooning Peeyush Jain as SP man, have gone into hibernation. With the unearthing of Peeyush Jain reality there hasn’t been any clarification from the media houses! No where perhaps in the world, is there a more ideologically bankrupt and corruptible media!

The ‘agencies’ are now bending backward as now officially it is being dished-out that the money ‘recovered’ has been that of a ‘turnover’ and therefore can easily be converted as ‘white-money’, once the tax which has been evaded, would be submitted. The Director General of GST Intelligence, Ahmedabad, has now come forward with a straight ‘bail-out’ and a clean-chit package to Peeyush Jain, as after all, it is BJP which had been his parent party, or was there also an inside arm-twisting that Peeysh Jain was asked for ‘donation’ and since he did not comply, a raid was made to ‘ teach-a-lesson’ and also in its way a message has been given to other businessmen, of BJP and others too, that such raids-are-coming, before the UP in 2022 and later until the general-elections of 2024. Very soon Peeyush Jain will be out on bail.
BJP had to cut the sorry figure as raid on Peeyush Jain, through which Amit Shah wanted UP to know the ‘source of money’ had gone in vain, but BJP wanted vengeance, and therefore, the ‘agencies’ this time zeroed on Push Raj Jain, the SP MLC, on December 30, in order to extract its political mileage, where there is none, as people in UP have totally decided to make BJP really-run-for-its-money. SP Chief Akhilesh Yadav, perhaps has rightly called that BJP has entered into an ‘alliance with agencies’ as many of its partners have walked-out of its coalition.
Come 2022 and UP will find it. Perhaps yes.