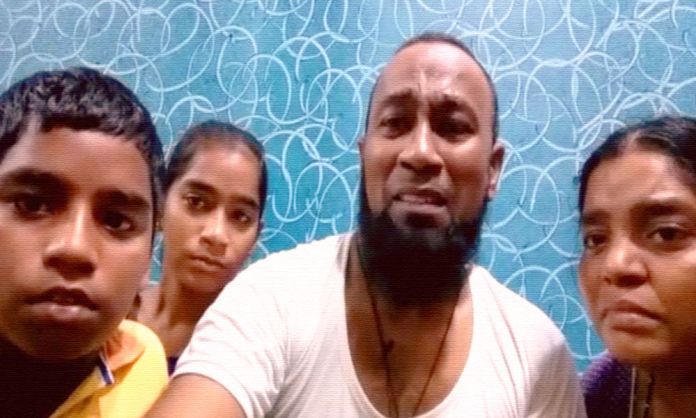 A Muslim family of four in Nandyal town of Andhra Pradesh recorded a video alleging police torture minutes before they committed suicide. They said they were forced to take the step as they had no other options to get rid of the continuous police harassment.

The two cops, Circle Inspector, Somasekhara Reddy, and Head Constable Gangadhar are arrested on charges of abetment of suicide, The Logical Indian reported.

In his last video that he recorded, Sheikh Abdul Salam along with his wife Noorjehan (38), their daughter Salma (14) and son Dadhi Khalandar (10) said he was falsely accused of two crimes he was no linked with.

“I didn’t do anything wrong. I have nothing to do with the theft that happened in the auto, or in the shop. I am unable to bear the torture. We have no one to help us. That’s why I hope at least my death will bring peace of mind,” Mr. Salam was quoted by the News Minute.

Mr. Salam was accused of theft at a jewellery shop he worked earlier. The owner of the store suspected Mr. Salam of having stolen the gold, he was sent to jail. After he was released on bail, he started driving a rented auto. However, he was continuously tortured by the shop owner and the police, the relatives told the media. Every time he used to go for routine formalities at the police states, the officers would hurl abuses at him.

He was arrested again after a passenger complained of his missing bag. The police alleged that the person had travelled in Mr. Salam’s auto and accused him of stealing. The two policemen harassed Salam for over seven months.

Former Chief Minister and leader of the opposition N Chandrababu Naidu described the incident as a result of the growing police atrocities on minorities in the state. He held the YS Jagan Mohan Reddy government responsible for the tragedy.

An inquiry has been initiated in the case, and Chief Minister YS Jagan Mohan Reddy, and two IPS officers, IGP Sankha Brata Bagchi and senior IPS officer Arif Hafeez have been appointed to conduct further investigation into the matter. The two policemen are booked under Sections 323 (Voluntarily causing hurt), 324 (Voluntarily causing hurt by dangerous weapons or means) and 306 (Abetment of suicide) of the Indian Penal Code.

Andhra Pradesh Muslim Personal Law Board president Altaf Raza, in a video released to the media, said, “People belonging to the minority community across the State are thanking the Chief Minister for intervening in the matter and sending top police officials to probe the case.” Hindustan United Muslims (HUM) president Syed Sami Hussaini, in an open letter, thanked the Chief Minister for ensuring that the accused were arrested.