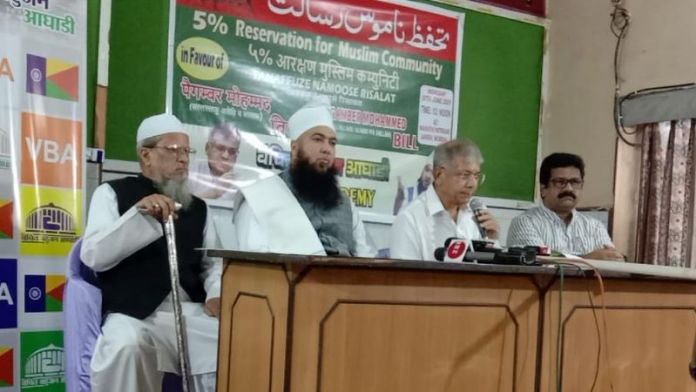 Addressing a press conference in Mumbai, the party’s chief Prakash Ambedkar and the organisation’s president Saeed Noori said that the five per cent reservation should be granted to put an end to the backwardness of Muslims and the Prophet Muhammad Bill should be passed to ensure ”strict” action against people ”insulting” the prophet.

The the draft bill related to Prophet Muhammad will be presented by BJP MLA Kapil Patil in the assembly session slated to start on 5 July.

The Draft of the Bill

An Act to provide for the prevention of spreading animosity, hatred and ill-will between different religion, caste, community, and for matters connected therewith or incidental thereto.

WHEREAS promoting brotherhood and fraternity amongst the citizens, assuring the dignity of individual and safeguarding the religious faith of every community is enshrined as one of the goal in the Preamble to the Constitution of India;

AND WHEREAS it has been observed that the cases are on rise wherein by using social media and other platforms, by making provocative speeches and comments an atmosphere of animosity, hatred and ill-will hate is unnecessarily created in the society by anti social elements which is prejudicial to the interest and further capable of tarnishing the very social fabric of our multi-cultured society;

AND WHEREAS on various occasions such spreading of animosity, hatred an dill-will has resulted into speared of violence causing law and order problems and death of the citizens;

AND WHEREAS it appears that the existing laws have been proved to be not effective in total elimination of the evil of creating animosity, hatred and ill-will in the society;

AND WHEREAS it is necessary to prevent spreading of animosity, hatred and ill-will in the society in the interest of public welfare;

AND WHEREAS with a view to ensure that the people in the State live in harmony with their human rights, it is expedient to provide for the prohibition of activities capable of creating and spreading animosity, hatred and ill-will in the society, and for matters connected therewith or incidental thereto; it is hereby enacted in the Seventy-First Year of the Republic of India as follows:-

(2) It extends to the whole of the State of Maharashtra.

(3) Whosoever by words, gestures, written matter, whether printed or not, or pictures or by some other visible or audible means, publicly or privately by using social media platforms, print or electronic media or any other means of communication-

(i) vilifies and maliciously insults or mocks the religious convictions of others, or

(ii) vilifies and maliciously insults or mocks, defiles, dishonors, or uses derogatory remarks against any Prophet, religious head or figure held in high esteem by any religious group or sect, or

(iii) maliciously desecrates objects of religious veneration, sacred books, scriptures, deity, or any other material, or

(iv) maliciously prevents, disrupts or publicly mocks an act of worship, or

(v) maliciously desecrates a place of worship or object that is intended for a religious ceremony, or for an act of worship, or

(vi) offends the feelings of members of a religious confession of their dogmas, beliefs, rituals, or ceremonies, or

(vii) Acts in any other manner with deliberate and malicious intention to outrage feelings of any class by insulting its religion or religious belief, or

(viii) Acts in any manner to create animosity, hatred and ill-will between different religions, caste, or between different groups, sects or community of the same religion or the caste, shall be punishable with imprisonment for a term which, on each count, shall not be less than three years but which may extend to seven years and shall also be liable to pay a fine, on each counts, of Rs.10,000/- which may extend to Rs. 50,000/-.

(4) All the offences under the act shall be cognizable, non-bailable and triable by the Magistrate of First Class.