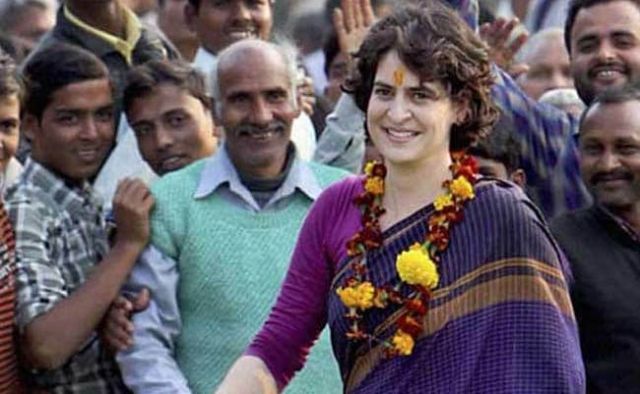 New Delhi: The decision for Priyanka Gandhi Vadra to formally join politics was taken last week when party president and her brother Rahul Gandhi joined her in the United States.

Heading for New York straight from Dubai, Mr Gandhi was on a special mission: To convince Ms Gandhi Vadra that her time to jump into politics was now.

So far, Priyanka Gandhi has kept it as a part-time interest, nursing the pocket-boroughs of Amethi and Rae Bareli for her brother and mother and taking on assignments like the Uttar Pradesh elections.Key members of the Congress told NDTV that while in the last two years, Ms Gandhi Vadra decided to eventually join politics, there was no time-frame. Busy with her children, she had kept the plan open-ended.

But when the prospects of alliance with Mayawati and Akhilesh Yadav in Uttar Pradesh ended, Rahul Gandhi decided the time was now.

The two met in the United States and timed the announcement to his trip to Amethi. Ms Vadra will be back in the first week of February.

“Had the alliance worked out, her joining politics may have been in a different format, at a different time,” said a key team leader. Now, the Congress is likely to fight all 80 seats and they are optimistically hoping that they will win at least 30 of those seats. Before this announcement, their projection was not more than 10 seats, party insiders said.

With this, there is now a unique situation of the Congress Working Committee having three members of the Gandhi family, including Sonia Gandhi.

Party insiders said that the new team of Jyotiraditya Scindia and Priyanka Gandhi is likely to have 90% candidates under 50 and at least half of them under 40 years of age. “It is a whole new aggressive Congress that will be seen in Uttar Pradesh and our objective is to make the party very strong over there,” said a party leader.

Her entry, insiders say, will go a long way towards appealing to the Brahmin voters, who makes up 12 per cent of the electorate in Uttar Pradesh, for which the Congress is vying against the BJP.

About the partnership of Jyotiraditya Scindia and Priyanka Gandhi, insiders say it fulfils two objectives. It compensates him for being denied the Chief Minister’s position in Madhya Pradesh.

Insiders also see him as a strong organiser and one who has great connect with workers. “The two together sends the message that we are taking Uttar Pradesh very, very seriously,” a leader said.

Samajwadi Party (SP) chief Akhilesh Yadav talked about “correcting” the Uttar Pradesh poll arithmetic by aligning with Mayawati’s Bahujan Samaj Party (BSP) but the exclusion of the Indian National Congress (INC) from the alliance seems to have saved the Bharatiya Janata Party (BJP) from a possible rout.

If results of the 2014 Lok Sabha elections are extrapolated in today’s emerging scenario, the BJP’s tally will shrink to only 20 seats, down from 71 out of 80, if it is pitched against the collective might of SP-BSP-INC. Even out of these 20 seats, the BJP has already lost Phulpur and Gorakhpur to SP-BSP-INC alliance in by-elections held in March 2018.

If locked in a triangular contest with the INC staying out of SP-BSP alliance, the BJP wins 38 seats, a loss of 33.

Among the seats where the BJP still appears to be strong include Prime Minister Narendra Modi’s constituency Varanasi. Kairana, Muzaffarnagar, Mathura, Agra, Lucknow, Kanpur, Bareilly and Deoria are other seats the BJP is likely to retain irrespective of any opposition alliance.

After the alliance between SP and BSP, the entry of Priyanka Gandhi in politics as in charge of her party’s campaign in eastern Uttar Pradesh has increased the headache for the BJP.

Being presented as a Congress trump card, Priyanka Gandhi will not restrict herself to the family pocket boroughs of Amethi and Rae Bareli but lead the campaign in the entire Purvanchal (eastern) belt comprising 24 districts from Amethi to Varanasi.

The Congress has declared its intent to take on the BJP in the state by also fielding Jyotiraditya Sinha, who is fresh from the poll victory in Madhya Pradesh, as in-charge of western Uttar Pradesh.

Akhilesh Yadav had allied with the Congress in the last Assembly elections but the move turned out to be disastrous for both the parties as the BJP swept the polls.

Priyanka Gandhi’s entry at this stage can once again change the electoral arithmetic of this most populous state in the country which sends the maximum member to India’s lower house.