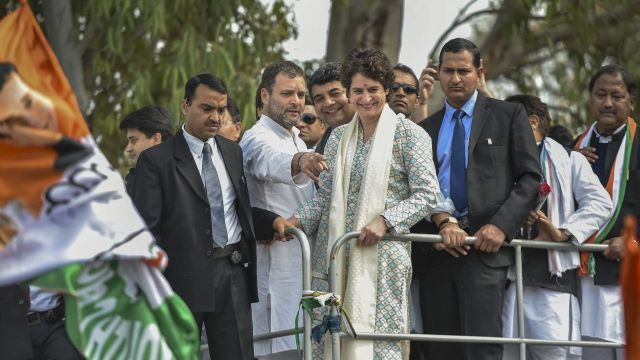 Lucknow : On her first public outing after making the political debut as Congress General Secretary, Priyanka Gandhi Vadra on Monday may have succeeded in drawing enough eye balls in the roadshow here but the road ahead may be arduous and bumpy.

After seeing the response of the moribund party workers during the 17-km-long event, political observers say it would take much more than a mere show on streets to revive the Congress fortunes in 44 Lok Sabha seats of eastern Uttar Pradesh which Priyanka Gandhi will oversee.

While a team of party veterans and young leaders is working overtime to brief Priyanka Gandhi on what lies ahead, she has the task cut out that is daunting, keeping in mind the organisational structure which is in shambles and the beaten morale of the grassroot workers.

The party has been out of power in Uttar Pradesh for more than three decades. As the Modi juggernaut rolled in 2014, its woes only worsened.

A weak organisation seems to be her biggest challenge. And so while the district units of Congress remain on paper, their existence and efficiency beyond that stands in serious doubt. Barring the big names in the Uttar Pradesh Congress Committee (UPCC) that jostled to find a place next to the Gandhis on the flower-decked bus during the roadshow, the party has a huge paucity of good faces at district level.

“There are no ‘karyakartas’ (workers)… only netas (leaders) at the state level,” rues a party activist at the Mall Avenue office of the Congress in Lucknow.

Leaders like former UPCC chief Rita Bahuguna Joshi, the one-day-Chief Minister Jagdambika Pal have migrated to greener or rather saffron pastures — the former is the Uttar Pradesh Tourism Minister while Pal is a Lok Sabha member of the BJP.

Forget, other parts of the state, the party is having chinks in the armour even in pocket boroughs like Amethi and Rae Bareli, where old loyalists like legislators Rakesh Prakash Singh and MLC Dinesh Pratap Singh have bid adieu to the party, jolting its prospects even in party strongholds, hitherto considered invincible.

Eastern UP, a task assigned to Priyanka Gandhi by her brother and Congress President Rahul Gandhi, is the toughest region to win over, even the most overzealous party men admit.

There are 44 seats in all if the eastern UP (Poorvanchal) and Avadh region in which Lucknow and Amethi fall under are taken together. And it is from here that Prime Minister Narendra Modi (Varanasi) and Chief Minister Yogi Adityanath (Gorakhpur) come from.

The party is not cadre based and had once the support, largely from a cocktail of communities and castes, which have now slipped out of its hands, barring Muslims and upper castes cut up with the BJP. Putting back the caste matrix which worked in its favour for decades in an uphill task for the 47-year-old Priyanka Gandhi.

The SP-BSP alliance and the 10 per cent jobs and educational quota for the upper caste poor decided by the Modi government have put a spanner in the Congress works. While Priyanka Gandhi may carry an aura around her, the party is still facing a dearth of “winnable candidates” in almost all parliamentary constituencies. If it has to win back its core Dalit, Pasi and Muslim vote, it will have to convince them about its winning chances.

“Floating voters and minorities vote tactically and would throw in their lot with Congress if it puts up winnable faces but the truth is there aren’t many,” says Asif Qureshi, a party sympathiser from Chowk in old Lucknow.

The party had put up 105 candidates in the 2017 Assembly elections when it tied up with the Samajwadi Party and won just 7 seats. It contested all the Lok Sabha seats in 2014 but won just two.

The BJP onslaught on her husband Robert Vadra — his clouded land deals and continued questioning by central agencies — could put the Gandhi scion in an uncomfortable position as and when the issue crops up from the electorate.