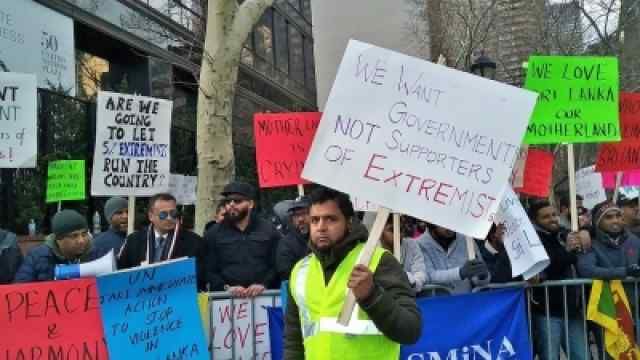 United Nations : Sri Lankan Muslims and supporters have demanded that the world organisation act to ensure that minorities are protected in the island nation and those behind the recent violence against their community are brought to justice.

About 250 people joined a demonstration outside the UN organised on Wednesday by The Association of Sri Lankan Muslims in North America (Tasmina), which asked the UN to intervene and hold the Sri Lankan government responsible for bringing the rioters to justice.

Ghazzali Wadood, who was one of the protesters, said: “It is the ultra-nationalists who are responsible for the attacks. The government should take action against the politicians behind the attacks.”

The protesters carried signs asking their “mother” Sri Lanka to protect them while denouncing the anti-Muslim attacks. For some at the demonstration, it was an intimate family tragedy that unfolded chillingly thousands of kilometres away live on their phones in the era of instant communications.

They narrated to IANS the harrowing moments they went through as they helplessly shared the trauma in real time over the phone with their families as the relatives were besieged by mobs during the riots. Munir Salim’s parent’s home was destroyed and car set ablaze by a rampaging mob in Welekada Ambalateena near Kandy on March 6, and his elderly parents and his sister with her five children barely managed to survive only because the rioters could not break the main door.

But they set fire to the second floor of the house, where his sister lived, said Salim, who is the president of the Sri Lanka Muslim Association of New Jersey. His sister fled downstairs with her children and survived with her parents, he added.

“I was feeling helpless talking to my parents when they first told me how they were throwing stones at our house and setting fire to the mosque and the shops in the area,” he said.

The rioters then moved away for a while seeking other targets, then returned to set the fire to the house and the properties as he was calling them back, he said. The houses of two of his aunts nearby were also attacked and his cousin had to carry his paralysed mother as they fled for their lives, he said.

There were two deaths, injuries to dozens of people, hundreds of houses and businesses destroyed and several mosques damaged during the riots that started on February 26 and continued till March 10.

Sri Lanka imposed a State of Emergency and deployed troops to quell the violence.

For Shihana Mohamed it was a heartbreak, listening over the phone as her family’s history of living harmoniously in the Kandy area for more than a thousand years, unravelled on March 5, she said.

Mohamed told IANS that her sister-in-law fractured her leg while fleeing the fury of the mob that attacked her brother’s house, destroying it and burning his car in Kengalla, also near Kandy.

Her 83-year-old bedridden uncle’s house was also attacked, she said, and his family had to carry him to safety.

As she was hearing about the attacks on her phone, she said that she wept and then desperately called diplomats asking for help.While the attacks were taking place, the security personnel stationed nearby did not intervene, she said.

Mohamed said that while the attackers were Sinhala extremists, there were other Sinhalas who came to the aid of Muslims at risk to themselves.

The Sinhala family next to her brother’s house tried to intervene, but the mob over-ran them, while a Sinhala neighbour stopped the rioters from burning down her house, even though they managed to break the windows, she said. Her uncle was protected initially by a Sinhala, she said.

In another instance of communal amity, she said a Tamil family sheltered her sister-in-law, who had broken her leg.

For her family this was the second setback. During riots in 1989, which were not overtly communal but more political, her family’s properties were destroyed and they had to rebuild home and business.