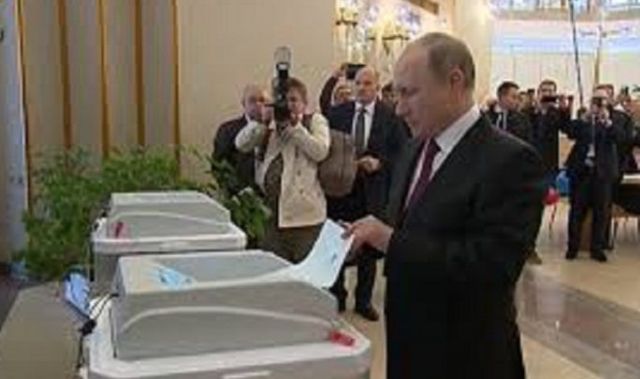 Moscow : President Vladimir Putin was leading in the Russian presidential election with 76.65 per cent of the votes after 99 per cent of the ballots were counted, the Central Election Commission (CEC) said on Monday.

Almost 55.5 million of voters supported his candidacy in the election that took place on Sunday paving the way for Putin, 65, to lead the country until 2024 after which he is constitutionally obliged to stand down, reports Sputnik news.

Putin thanked volunteers for their hard work during the election campaign and called the preliminary results “very decent”.

“I think that we are a big team… I mean everyone who voted today and due to the position of whom this very decent result emerged,” Sputnik news quoted the President as saying here on Sunday night.

Meanwhile, Communist Party candidate Pavel Grudinin is in the second place with 11.87 per cent of the vote, followed by head of the Liberal Democratic Party of Russia Vladimir Zhirinovsky with 5.73 per cent, Civil Initiative party candidate Ksenia Sobchak with 1.64 per, according to the CEC.

Grigory Yavlinsky, the co-founder of the Yabloko Party, has received only 1.02 per cent of votes followed by Presidential Commissioner for Entrepreneurs’ Rights Boris Titov with 0.75 per cent, Communists of Russia party chairman Maxim Suraykin with 0.68 per cent and Sergey Baburin from the All-People’s Union party with 0.64 per cent.

Putin’s fiercest political opponent, Alexei Navalny, had been barred from competing because of an embezzlement conviction that he said was manufactured by the Kremlin, reports the BBC.

He called for a boycott of the election.

In his first reaction to the preliminary results, Navalny indicated he had been unable to contain his anger.

“Now is the season of Lent. I took it upon myself never to get angry and not to raise my voice. Oh well, I’ll try again next year,” he tweeted.

Sunday’s vote was also the first in Crimea since Russia seized the region from Ukraine.

However, Russians living in Ukraine were not allowed to participate.