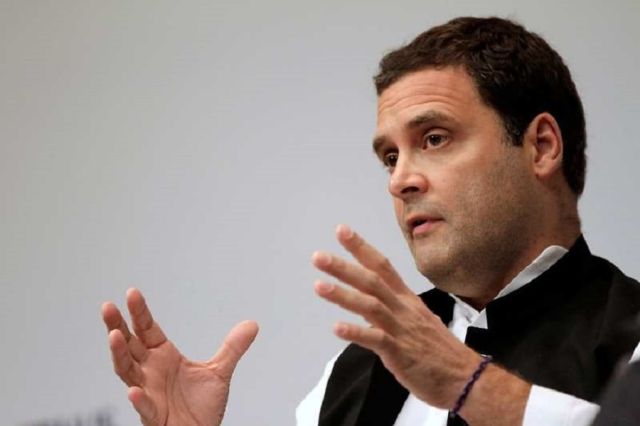 Rahul Gandhi has had another of his escape-velocity-of-Jupiter moments.

His reference to the massive gravitational force of the solar system’s largest planet was in the context of “explaining” how much velocity was required by a spacecraft to lift itself from the surface of Jupiter compared to what was required on earth — 60 km/sec against 11 km/sec.

According to him, this was the kind of stupendous “effort” which the Dalits needed to “escape” from their present lowly socio-economic conditions.

Following that foray into space science, the Congress president has now offered an economic “explanation” for the lynchings in India during a speech in Germany by arguing that the unemployment caused by demonetisation, which hit small businesses, is behind the mob violence.

Moreover, the traders and entrepreneurs have also experienced grave difficulties because of the “badly implemented” Goods and Services Tax (GST).

The link, however, between demonetisation and lynching is tenuous. For one thing, the people in general showed exemplary patience in lining up for hours before banks and ATMs after the Rs 500 and Rs 1,000 currency notes were withdrawn from circulation.

For another, the cow-related lynchings of Muslims are widely believed to be the outcome of the atmosphere of hate created by the longstanding anti-minority propaganda of the saffron brotherhood, which has gained traction with the Bharatiya Janata Party’s (BJP) assumption of power.

Demonetisation and GST have nothing to do with the attacks on Muslims for consuming beef or transporting cattle.

After this flawed interpretation of communal incidents, Rahul Gandhi ventured into another dicey area by linking the rise of the Islamic State in West Asia to the US intervention in Iraq and the resultant insurgency caused by the stalling of the “development process”.

If the Congress president’s point is that the absence of adequate economic opportunities for Muslims and Dalits can breed terrorism in India, he can only be said to be grossly exaggerating.

He had earlier acknowledged during a visit to the US that he is not as good a speaker as Prime Minister Narendra Modi. Now he has shown that his arguments are not always credible.

Little wonder that the BJP is cock-a-hoop with joy, for Rahul’s speech has reinforced, in its view, his Pappu image which he had been gradually shedding.

In the present highly charged political atmosphere, there is every need for public speakers to weigh their words with care lest the slightest slip enables their opponents to trip them up. No quarter is given at the moment, which is perhaps as it should be, for the age of gentlemanly parry and thrust in politics is over.

For Rahul Gandhi and the national opposition, there are any number of issues on which the BJP can be criticised. These include, among other things, the insecurity of the Muslims as a result of the lynchings and the perception among Dalits of being oppressed, which has been reinforced by the prolonged incarceration of one of their top-ranking leaders, Chandrashekhar Azad “Ravan”.

The fear among the Muslims and also peace-loving Hindus have also been heightened by the possibility of violence caused by various diktats of the Hindutva lobby such as banning animal slaughter on the occasion of Eid or the provocative shows of strength with the brandishing of arms by saffron groups during Navaratri which used to be earlier always observed peacefully.

Apart from these flashpoints, there are also the problems of unemployment and agrarian distress. There is no need, therefore, to range further afield by referring to the Islamic State, especially when the Muslim community in India has always shunned terrorism except for a few who have gone to Syria.

If anything is to be highlighted, it is this spirit of forbearance and tolerance for which the country has always been known rather than the possibility of deprivation leading to the adoption of extreme measures.

India is on the brink of a seminal change. The two opposing political forces facing each other — the BJP on one side and the Congress and the national opposition on the other — represent two virtually diametrically opposite “ideas” of India.

While one is avowedly Hindu-centric, the other emphasises the country’s composite culture.

As one of the leaders of the latter group, Rahul Gandhi has to demonstrate that he and his party are ready to put behind them the ignominious past of being able to win only 44 seats in the Lok Sabha and are ready to take on the BJP’s formidable election machinery and its highly articulate orator, Narendra Modi.

To do so, Rahul Gandhi has to choose his words with care whether speaking at home or abroad and concentrate on the BJP’s obvious weak points instead of looking for parallels from world events.

Since the BJP has the advantage of having a domineering “presidential” figure at its helm, it is keen on turning the next year’s general election into a one-to-one contest with Rahul Gandhi in mind since there is no other leader in the non-BJP camp with a pan-India appeal as his not inconsiderable 27 per cent approval rating compared to Modi’s much higher 49 per cent shows.

But to make it a battle of equals, Rahul Gandhi must not neglect his home work.