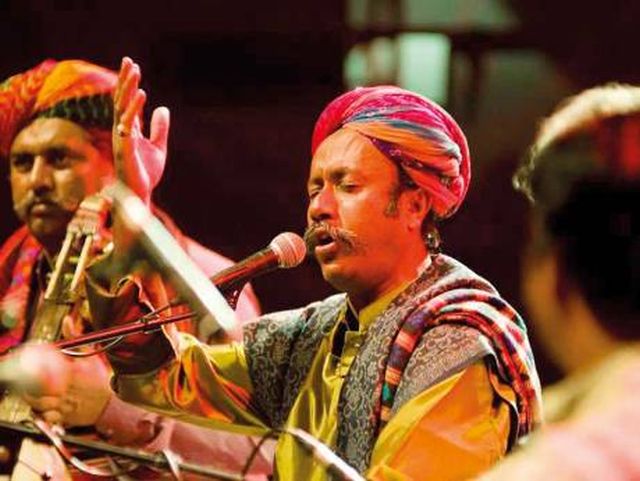 Jaipur : They are Muslims, yet they sing Krishna “bhajans” (hymns) from Hindu lore. They have adopted a hybrid culture that is a mix of both religions and lifestyles. Many of their names too blend two religions, like Shankar Khan and Krishna Khan.

They are the Manganiyaars, who hail from western Rajasthan, where a thriving legacy of secular music has touched the hearts of music lovers not just in India but in many countries across the world where they have played. But they remain a struggling lot at home.

According to Manjoor Khan, a grandly-turbaned Manganiyaar folk singer, their art has flourished under the Rajputs. “Hindu Rajputs have kept our legacies live; they have protected us and kept our art living and thriving. For years, we have been singing for them,” Khan told IANS.

“Since centuries, our ancestors brought in a musical tradition, soaking the rhythmic waves emanating and emerging from Persia and Punjab. Over the years, our music earned fame as our melodies transcended the boundaries to win hearts of people across the world,” he added.

Western Rajasthan truly symbolises the cultural pluralism of India — what is called the Ganga-Jamuna culture — as many Muslims residing here, since their birth, have adopted the lifestyle and dress of Hindus because of centuries of cultural osmosis between the two religions.

Manganiyaars’ music blends the traditions of Hindustani and Sufi music. Many generations were connected to both Muslim and Hindu families to earn their livelihood where they sang and composed music for their “jajmaans” (patrons).

The Manganiyaars story is incomplete without mentioning Langas, their musical cousins. Langa means “song giver” and includes poets, singers, and musicians from Barmer. They too had expertise in Sufi singing and hence their patrons, unlike the Manganiyaars, were Muslims. They too performed at events such as births and weddings, exclusively for their patrons.

The Manganiyar performers traditionally invoke the Hindu god Krishna and seek his blessings before beginning their recital while the Langas sing sufi songs.

Now, as their royal patrons exist no more, the Manganiyaars and Langas face tough times. Many of them still thrive on the mercy of their patrons’ places who are limited in numbers now.

While their community earns fame in the global arena, the Manganiyaars battle for their existence on home turf.

Bhungar Khan Manganiyaar, who now performs in countries like Australia, UK, Sweden, Norway, Germany and Russia, complains that this age-old legacy lacks the required support from the government in India and the new age generation is losing interest in this music.

There still exists a few artists, such as his stage partner Asin Langa, who teaches the rhythms of the music to kids at his home. “We need proper schools and trained teachers who can help build next-generation artists, but this seems like a distant dream,” Khan says.

Asin Langa also shares the pain. “I run a small school at my home where I teach 15 kids. In 2011, we received funds from Delhi Academy for a year which was like Rs 2,500 per kid and Rs 7,500 per teacher. That fund was received in my father’s name. However, we are still awaiting more funds. Now, as my father is no more, I have inherited the task of teaching kids, but, at times, I too feel the financial crunch,” Langa told IANS.

The duo believe that this legacy is going on due to efforts of people like them.

“We have been receiving a helping hand from private firms, but government extends no aid to us,” he complained.

Earlier, their music was limited to the borders of western Rajasthan, but now even Bollywood seems quite influenced with their magic. Recently, two children of these communities made it to Bollywood chartbusters.

The credit for getting their music some national and international attention goes to Komal Kothari, who brought the traditional musicians before a larger, even global, audience. Previously, they preferred surviving on the patronage of wealthy merchants in caravan towns. As their patrons’ fortunes waned, so did theirs, before Kothari came along.

Also known as Komalda, he was the first to record the Manganiyars for a radio programme. Awarded Padma Shri and Padma Vibhushan for his exceptional work in the field of music, he was an Indian folklorist and ethno-musicologist from Jodhpur.

In 1960, he met Antar Khan, a Manganiyar, on the street, and soon he took him to his office. As he was preparing his vintage tape recorder to record him, he saw him disappear. When chased and caught, the poor man said that he feared his voice might be swallowed by a recording machine if he sang in front of it.

Kothari started making quick trips to Jaisalmer, in Manganiyar country, to talk to them on earning a new livelihood.

In 1962, the first recording of Langa music took place. In 1963, a Manganiyar troupe performed in Delhi, for the first time on stage. But Kothari wanted to showcase them to world.

In 1967, he traveled to Sweden with Langa troupe for their maiden performance outside India. Soon the Indian Council of Cultural Research (ICCR) got into the act. By the time India staged the popular Festivals of India all over the world in the mid-eighties, Manganiyars and Langas had become the darlings of international audiences.

Today, Rajasthan’s tourism industry is driven quite substantially by these charismatic performers. But they fear that without institutionalised support, their tradition may just die out.

(The weekly feature series is part of a positive-journalism project of IANS and the Frank Islam Foundation. Archana Sharma can be contacted at archana.s@ians.in)