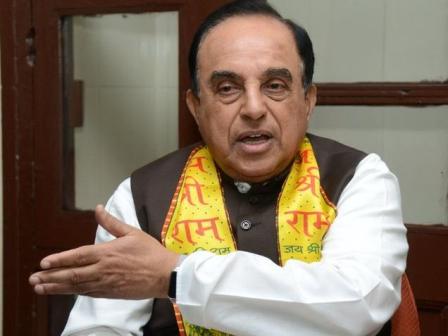 New Delhi: BJP leader and Rajya Sabha MP Subramanian Swamy on Monday reiterated his claim that the construction of the Ram temple at Ayodhya in Uttar Pradesh will start before the year-end.

The process to abrogate Article 370 in Jammu and Kashmir will begin by the end of 2017, Swamy said at a daylong ‘Samvad’ programme organised by Hindi news channel India TV.

“The Ram temple’s construction will begin by the end of this year. All stakeholders are in favour of the Supreme Court hearing into the case on a day-to-day basis,” Swamy said.

“If it happens, the judgment will be delivered in only a few months,” he added.

“It’s just not possible as even the translation of the court documents will take six months,” he said.

“Article 370 is a binding factor to keep Jammu and Kashmir united. Till the time the article is there, we will be able to keep the state united,” Owaisi said, adding that Jammu and Kashmir is an integral part of India.

Taking a dig at the Bharatiya Janata Party, Owaisi said the BJP leaders forgot Article 370 when they finalised the power-sharing formula with the People’s Democratic Party in the state.

“The BJP has been exposed,” he said.

The Lok Sabha MP from Hyderabad also said that a uniform civil code is not possible in India.—IANS