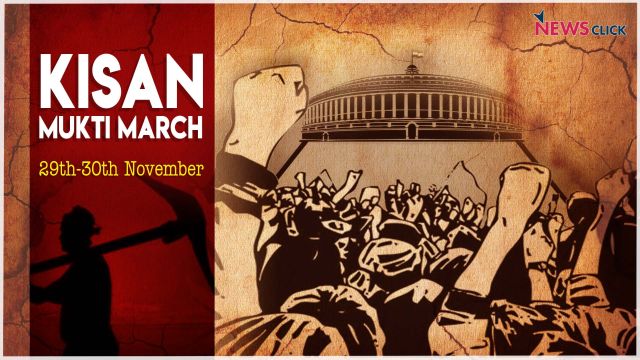 P Sainath, Journalist and the founder of People Archive of Rural India delivered his speech to scores of students at the gate of Zakir Husain Mausoleum in Jamia Millia Islamia on Wednesday. The speech was organised to mobilise support for Kisan Mukti March which is going to be organised in Delhi on the 29th & 30th of November. The speech which was scheduled near the Sociology lawns of the university was cancelled at the last moment and shifted from outside the university.

Addressing to the students Sainath said, “In the last twenty years more than 3 lakh farmers have committed suicide in our country” adding that it is a “severe underestimate” but a “horrible figure”. P Sainath has been the former Rural Affairs Editor of The Hindu and won the Ramon Magsaysay Award in 2007.

The event was part of a series of lectures that Sainath is delivering in university campuses around Delhi to gather support for the Kisan Mukti March. Sainath said that farmers are losing their land every year and becoming landless farm labourers. He added that every day India is losing more than 2000 farmers which is very alarming for the country. Therefore the Kisan Mukti March has been organised to demand special session of Parliament to discuss the agrarian crisis in the country.