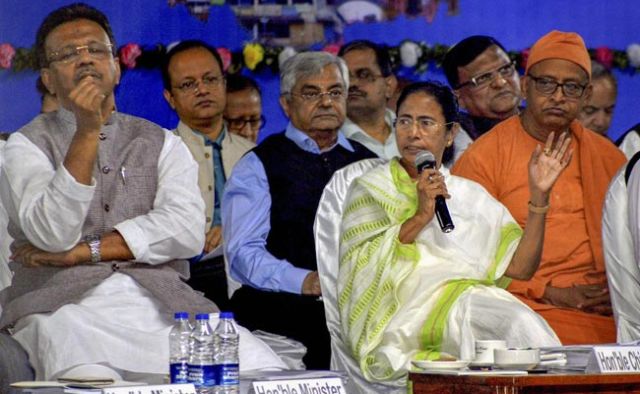 Kolkata : Urging all regional parties to join hands to defeat the BJP in the 2019 general elections, West Bengal Chief Minister Mamata Banerjee on Thursday warned the saffron brigade that for them alarm bells have already started ringing.

“All regional parties should join hands to defeat the BJP in 2019 (Lok Sabha poll),” Banerjee said at a rally organised by the Trinamool Congress on the International Women’s Day.

Ridiculing Bharatiya Janata Party’s target of unseating the Trinamool to capture power in Bengal, Banerjee said it would remain a “dream”.

Refering to the Telugu Desam party quitting Narendra Modi’s government, Banerjee asked the BJP whether it could hear the sound of revolt.

“Are you (BJP) not able to hear the sound of revolt from various parts of the country? Are you not able to read the results in Rajasthan, Madhya Pradesh and Gujarat? The TDP has walked out,” she said.

Decrying the centre’s failure to give a special category status to Andhra Pradesh, the TDP has quit the Modi government, with its Ministers P. Ashok Gajapathi Raju (Civil Aviation) and Y.S. Chowdary (Science and Technology) submitting their resignations.

Banerjee predicted the BJP’s defeat next year, and asked it to introspect whether it was in a position to retain power at the Centre.

“Stop dreaming about coming to power in Bengal, ook at yourselves and see whether you are in a position to retain power at the centre,” the Chief Minister said.