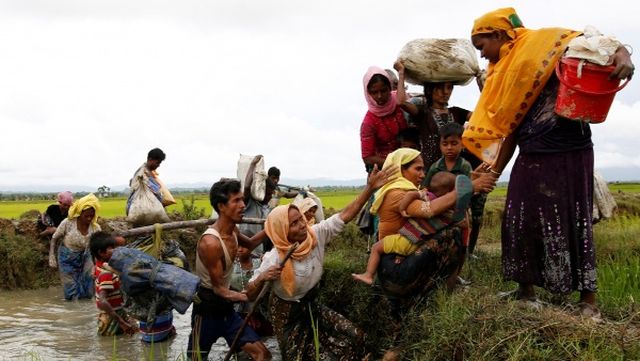 “Rohingya influx from Rakhine state of Myanmar to Bangladesh is a serious and common security challenge not only for Bangladesh but for the entire region,” Shringla told IANS during an interview.

“Bangladesh has engaged itself to address the issue. They have taken up the issue with the UN. The Bangladesh government is also working through multilateral agencies besides bilateral negotiations with Myanmar.

“Bangladesh and Myanmar signed an agreement to repatriate the Rohingya Muslims. This is a humanitarian crisis even though the issue posed a common security challenge not only for Bangladesh but for all the countries of the region.”

Over 1.15 million registered Rohingya have been residing in the south-eastern part of Bangladesh, known as the Cox’s Bazar region, after they fled Rakhine to escape a military crackdown on their villages last August.

To a question about extremist activities in Bangladesh, the visiting Indian envoy said that Prime Minister Sheikh Hasina pursued a zero tolerance policy on terrorism.

“After the terror attack in Dhaka’s Holey Artisan Bakery cafe in July 2016, law and order agencies have been active against terror activities. No major incident has taken place since. The issue cannot be resolved overnight. This is a continuous process,” Shringla said.

The visiting diplomat during his meeting with Deb discussed various issues like connectivity, people to people contact, hassle free movement of Indians to Bangladesh, trade and economic activities.

“India’s relationship and partnership with Bangladesh was based on cooperation, mutuality of benefit and respect for each other. People to people contact is very important,” Shringla said.

The High Commissioner said that 111 agreements have been signed between India and Bangladesh in the last ten years in different sectors. India has given $8 billion in three Lines of Credit to Bangladesh.

According to the envoy, total trade between the two countries in 2016-17 was $7.5 billion while $3.3 billion worth Indian investment proposals are registered with the Bangladesh government.

He said that India is currently supplying 660 MW of power to Bangladesh from West Bengal and Tripura.

India has spent Rs 19.14 crore to create the infrastructure for the third International Internet Gateway in Agartala to get the 10 gigabit bandwidth from Bangladesh Submarine Cable Company Limited.

For this, an optical fibre cable link has been established between Akhaura (along Agartala) and Cox’s Bazar in Bangladesh.

Regarding the 2019 Bangladesh parliamentary elections next year, the Indian envoy said it was the country’s internal matter.

“Bangladesh has a vibrant democracy like ours. The country is holding periodic elections. We look forward to a very free and fair process of election in Bangladesh.”

He said that India-Bangladesh relations were based on common history, language, culture besides a common border of over 4000 km.

“Today we are enjoying the best ever relations. During the past 10 years, relations have improved enormously. Cooperation, friendship and partnership are beneficial for both the countries.

“The countries have invested significantly to develop infrastructure along the borders to promote trade among the two neighbours. The border infrastructure is being further developed to enhance trade and economic activities between the two nations.

“Currently 36 land customs stations (LCS) are operational along the India-Bangladesh border. Further upgradations were being done along the Assam, Meghalaya, Tripura besides West Bengal borders,” he added.

Shringla said that to further improve the ongoing bus services between Dhaka, Kolkata, Agartala, Shillong and Guwahati, more steps would be taken to make the bus services more effective as it is inexpensive for people of both the countries.