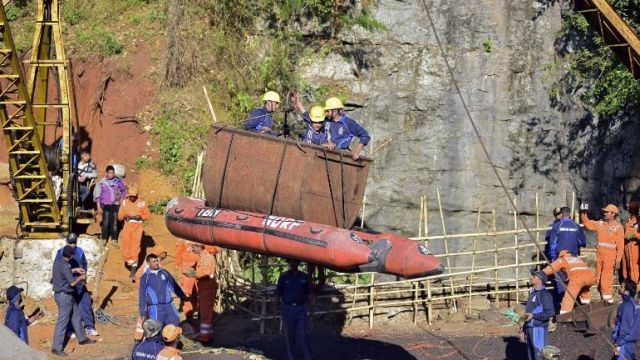 New Delhi : The Supreme Court on Friday asked what action has been taken against the owner of the illegal coal mine located in East Jaintia Hills district in Meghalaya in which 15 miners are trapped since December 13.

“What you have done against the person who was indulging in illegal mining? What about the officials who were conniving in the illegal mining,” asked Justice A.K. Sikri as senior counsel Anand Grover told the court that a number of agencies, both governmental and private, are offering assistance in rescue operations but there is no coordinating authority to take decisions.

Other judge on the bench is Justice S. Abdul Nazeer.

Grover, appearing for PIL petitioner Aditya N. Prasad, told the court that due to lack of coordination and also some hurdles being faced by the teams engaged in rescue operations and working on the site, the desired results are not there.

He said that the Hyderabad-based National Geophysical Research Institute (NGRI), Roorkee-based National Institute of Hydrology (NIH) and some other private research institutions including Chennai’s Planys Technology need to be associated in the rescue operations.

The court was also told that the Indian Air Force help is needed to lift heavy equipment to the spot hit by tragedy.

Solicitor General Mehta told the court that despite their best efforts with the high-power pumps of Kirloskars, Coal India Ltd and that of the Meghalaya government pumping out the water, the water level has gone down by just eight inches as more and more water is coming from adjoining Lytein river.

Mehta said all the agencies named by petitioner Prasad have already been contacted by the government and everything possible is being done to augment the rescue operations.

The court was told that the operations is facing difficulty as water in the mine is muddy.

The court listed the matter for January 18 for further hearing.