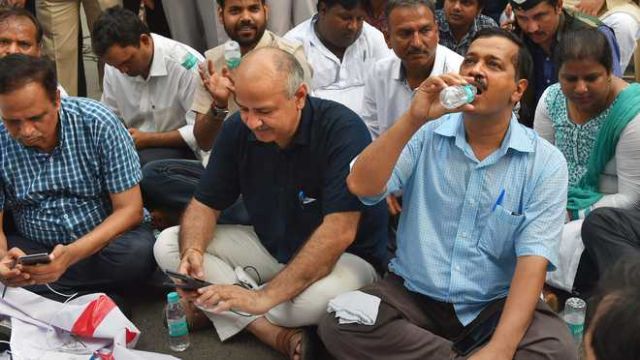 New Delhi : The Supreme Court on Tuesday declined to hold an urgent hearing of a PIL seeking a direction to the Delhi High Court to expeditiously hear a plea for declaring the sit-in protest at Delhi Lt. Governor Anil Baijal’s office by Chief Minister Arvind Kejriwal and others unconstitutional and illegal.

The vacation bench comprising of Justice S. Abdul Nazeer and Justice Indu Malhotra said the matter would be heard on the opening day when court reopens after the summer break even as lawyer Shashank Deo Sudhi, appearing for the PIL petitioner, told the court that there was a constitutional crisis and a vacuum, and the administration was paralysed.

Sudhi appeared for PIL petitioner and advocate Hari Nath Ram, who told the vacation bench that the matter was listed before the Delhi High Court on Monday (June 18) but was directed to be heard next on June 22.

Seeking a direction to the High Court to hear the matter urgently, Sudhi told the bench that politicians were not above the law and there was a threat to the rule of law.

He referred to earlier court pronouncements by which the strikes were held to be illegal.

The lawyer said before the High Court they have prayed that perjury proceedings be initiated against the Lt. Governor and the Chief Minister for making conflicting claims on the strike by the bureaucrats serving in the Delhi government.

Kejriwal has said he and his colleagues would not leave Baijal’s office until their demands, which include direction to IAS officers to end their “strike”, action against officers who have struck work for “four months” and approval to his government’s proposal for doorstep delivery of ration to the poor, were met.

During Monday’s hearing, the High Court had sought to know from the AAP government who has authorised Kejriwal and his cabinet colleagues to hold a sit-in protest at the Lt. Governor’s office as it was not the place to hold a demonstration.

The bench had said the protesters cannot go inside someone’s office or house and go on strike and as such the strike cannot be held inside the Lt. Governor’s office.

The High Court has been hearing three separate petitions related to Kejriwal’s sit-in protest at the Lt. Governor’s office.

One petition was filed by Leader of Opposition in the Delhi assembly, Vijender Gupta seeking direction to Kejriwal to return to work.

Another petition was filed by Hari Nath Ram through his advocate Shashank Deo Sudhi seeking to declare the sit-in protest at the Lt. Governor’s office unconstitutional and illegal.

The third plea was filed by advocate Umesh Gupta who sought to end the alleged ‘informal strike’ by the IAS officers.