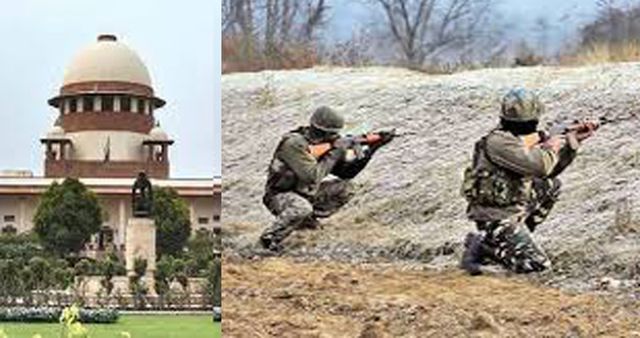 New Delhi : The Supreme Court will hear on September 4 a plea by a group of serving Army officers against the dilution of AFSPA that gives immunity to military personnel from prosecution for their actions in disturbed and insurgency-hit areas.

A bench of Justice Madan B. Lokur and Justice Uday Umesh Lalit will hear the matter. The bench is already hearing a plea by kin of victims of alleged fake shootouts or extra-judicial executions in Manipur by state police and the armed forces.

A bench of Justice Madan B. Lokur, Justice S. Abdul Nazeer and Justice Deepak Gupta listed the matter for hearing by the two-judge bench on September 4.

The petition is essentially rooted in the top court’s order on alleged extra-judicial killings in Manipur.

The petitioners have sought specific guidelines to protect military personnel from criminal proceedings for bona-fide actions done in the discharge of official duties in areas infested with insurgents and witnessing proxy wars against India.

The petitioners range from Section Commanders to Commanding Officers who lead section, platoon, company, battalion made of 10 to 1,000 men each.

They have contended that the protection provided by the Armed Forces Special Powers Act (AFSPA) does not confer any special right on a soldier for himself, but facilitates his functioning and operations in extraordinary circumstances of proxy war, insurgency, armed hostility, ambushes, and covert and overt operations.

Drawing a distinction between routine policing and military operations in disturbed areas, they contended that absolute protection for bona-fide actions of soldiers in extraordinary situations is imperative to enable them to carry out their duties effectively and efficiently.

This protection from criminal prosecution for bona-fide actions of a soldier in the course of military operations in disturbed areas, the petition says, is sine qua non for the protection of the country’s sovereignty and integrity.

The officers have sought a court direction that “protection of persons acting in good faith under the AFSPA is sacrosanct with the sovereignty and integrity of the nation” and that “no prosecution, suit or other legal proceeding shall be instituted, except with the previous sanction of the Central government….”

They further averred that it was the Army alone which is familiar with the dynamics of these operations, and was capable of probing allegations of criminality, misuse, abuse, or of excessive use of power by men in uniform.

“Civil police or even the Central Bureau of Investigation can’t even be expected to be in the know of complete picture,” they claimed.

The petition by Colonel Amit Kumar and others is rooted in the persecution and prosecution of military personnel for carrying out their bona-fide duties in disturbed areas of the northeast, particularly in Manipur and trouble-torn Jammu and Kashmir, and directing registration of cases.

The military personnel, the petitioner officers contended, were being targeted without making any distinction or determination whether their actions were in good faith and without any criminal intent.