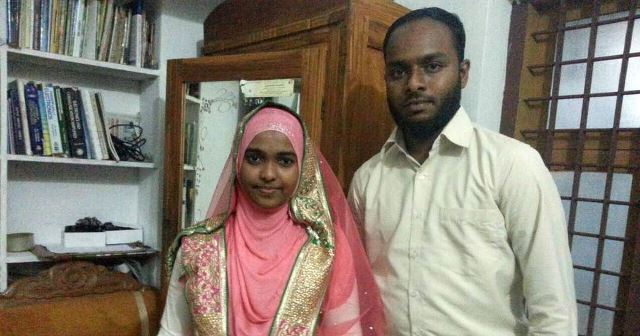 New Delhi, Feb 22 : The Supreme Court on Thursday rejected the argument that Kerala woman Hadiya, in midst of a ‘love jihad’ controversy, was “vulnerable” to being recruited by terror group IS, saying that the government can stop people going overseas for illegal activity but stressed its “worry” over the high court annulling her marriage.

“Can we say that the marriage is not in the best interests of a marrying couple? Whether it is right or wrong, or she (Hadiya) did not marry a right person, it is for the consenting individuals to decide.

Reiterating the position that marriage between two consenting adults can’t be nullified in a habeas corpus petition, the bench of Chief Justice Dipak Misra, Justice A.M. Khanwilkar and D.Y. Chandrachud said that there was a roving inquiry by the High Court into the marriage.

“What troubles us is (that) can there be a roving inquiry into a marriage between two consenting adults,” said Chief Justice Misra as Divan, appearing for Hadiya’s father Asokan, argued that there was a roving inquiry.

Justifying the annulling of marriage, Divan cited the “notion of vulnerable adult”, implying Hadiya was vulnerable to the well-oiled network that was involved in the indoctrination of impressionable minds trafficking and recruiting them for Islamic State (IS) operations in Syria.

He referred to 21 such cases in Kerala alone.

Apparently unimpressed by his submission, the Chief Justice said: “You look at history… such type of vulnerable adults were at all the times. The question is can the High Court in exercise of its powers under Article 226 (of the Constitution) nullify the marriage because one of the adult (in marriage) is vulnerable.”

Meanwhile, Justice Chandrachud said: “If the government has credible information about trafficking and network recruiting people … then it has sufficient powers to prevent such people from travelling abroad. Travelling overseas can be regulated.”

Making it clear that the question was limited to whether a high court can annul a marriage while hearing a habeas corpus petition, the court asked the respondents, including Asokan and the National Investigation Agency (NIA), to file response to an affidavit filed by Hadiya.

Hadiya, in her affidavit before the top court, has said that she converted to Islam and married Jahan on her own and wanted to remain like that.

She has levelled allegations that her father and some NIA officials for being prejudiced — a part of the her affidavit which Additional Solicitor General Maninder Singh wanted to be deleted.

Once again making it clear that the NIA while investigating any criminality would not venture into the marriage, the court directed the next hearing of the matter on March 8.—–IANS

No evidence of ‘LOVE JIHAD’ , NIA closes investigation in Kerala