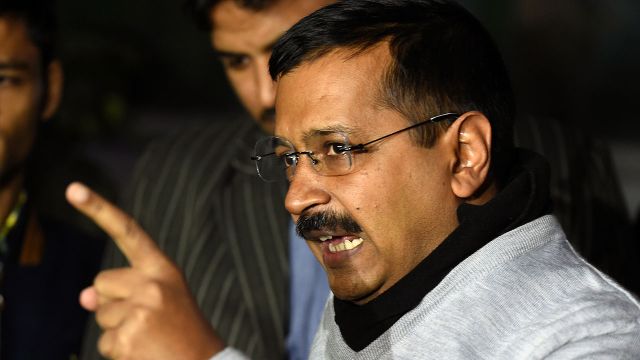 New Delhi : Delhi Chief Minister Arvind Kejriwal on Tuesday said that his government will approach the Supreme Court for a stay on the ongoing sealing drive, after a meeting between the ruling AAP and BJP ended in chaos and a political blame game.

The sealing of shops and businesses — even doctors’ clinics — located in residential premises in the city is being carried out by a Supreme Court-appointed Monitoring Committee and implemented by the three BJP-led Municipal Corporations.

“Strongest possible action is essential to ensure such incidents do not recur. Such violence, falsehood, and intolerance on Mahatma Gandhi’s martyrdom day is tragic,” Gupta said.

On the other hand, Kejriwal said the BJP delegation led by its Delhi unit President Manoj Tiwari walked out of the meeting instead of trying to come up with suggestions that could be presented to the Lt Governor for remedial measures.

Kejriwal said: “All our MLAs and councillors had gathered for the meeting with the BJP delegation. But they refused to have a discussion in front of everyone.”

“There is nothing confidential about it. It is nobody’s personal issue. It is a public matter. I begged them to sit down, discuss, and together find a solution to the sealing drive. But they just walked out,” he said.

Tiwari later said that the AAP should end “urban naxalism” and said that a complaint had been filed at the Civil Lines police station.

“The AAP had over 150 supporters at the meeting. We wanted a meeting in a closed room. They misbehaved with our women Mayors and our MLA Vijender Gupta and disrupted the meeting. This is is highly condemnable,” Tiwari told reporters.

After the meeting ended, with both sides blaming each other, Kejriwal visited many markets, including in Hauz Khas, Sadar Bazar, Chandni Chowk, and Hudston Lane to take stock of the sealing drive.

Addressing a gathering in Meherchand Market in South Delhi, the Chief Minister said that the AAP government was “totally against sealing occurring in the city”.

“In the next two to three days, the Delhi government will file a petition in the Supreme Court to get a stay on the sealing drive,” Kejriwal said.

“We will put all your problems in the petition and get a stay from the Supreme Court,” the Chief Minister said.

Kejriwal said that traders were not given notice before the sealing and termed the drive as “hooliganism”.

The Chief Minister said that he had written a letter to the Lt Governor to urge him to implement four steps to put an end to the drive.

Kejriwal said that the Lt Governor and the central government have the powers to implement these steps and they can end the drive in 24 hours if they wish to do so.

AAP leader Dilip Pandey sat on a hunger strike near the Civic Centre in Central Delhi, alleging that the BJP was responsible for the ongoing sealing drive.

Later, AAP MLA Saurabh Bharadwaj tweeted that the three Municipal Corporation Commissioners will appear before an Assembly committee on the issue on Wednesday, wherein Delhi officials concerned too will be present.