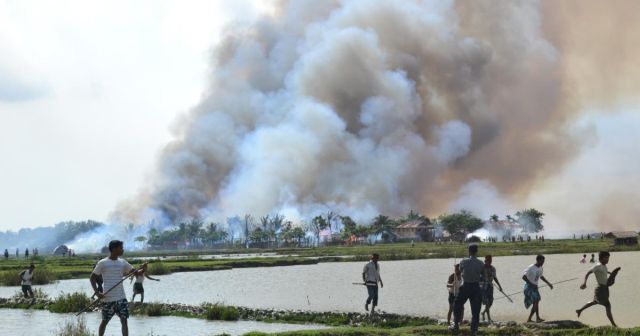 Nay Pyi Taw : The non-profit Human Rights Watch on Friday urged the Myanmar government to stop the demolition of villages abandoned by the Rohingya minority in Rakhine state from where almost 700,000 members of the community have fled to Bangladesh.

HRW said satellite images revealed that the government has bulldozed dozens of Rohingya settlements and added that they should be preserved as “crime scenes” to investigate allegations of atrocities against the military, reports the BBC.

“Many of these villages were scenes of atrocities against Rohingya and should be preserved so that the experts appointed by the UN to document these abuses can properly evaluate the evidence to identify those responsible,” said Brad Adams, Asia Director, HRW.

“Bulldozing these areas threatens to erase both the memory and the legal claims of the Rohingya who lived there,” he added.

The Rohingya exodus started after August 25, 2017, when the military carried out a campaign in retaliation for attacks by a Rohingya rebel group on multiple government posts.

According to the HRW statement, since late 2017, authorities have used heavy machinery to clear at least 55 villages of all structures and at least two of the demolished villages were previously undamaged.

Between January 9 and February 13, bulldozers razed two settlements in the village of Myin Hlut that appeared intact in images from November 2017, the non-profit said.

HRW said that 362 Rohingya villages had already been completely or partially razed during the military campaign last year.

The repatriation of Rohingya refugees, numbering around 688,000, should have began within two months of November 23, 2017 – when an accord between Bangladesh and Myanmar was signed – but Bangladesh decided to postpone the process in January.

The non-profit has demanded that representatives of the UN be given access to Rakhine to study the allegations the army committed murder, rape and other crimes.